Saturday 24 September 2022: 23:36. Last time I wrote a post on my future house build, I mentioned how progress had been frustratingly slow due to people not responding to email or phone calls. That hasn’t got any better (indeed, currently most builders aren’t responding to requests for quotes, and if they do, they give lead times well into 2025

), but my wonderful sister Aoife did manage to get me some groundworks done by pulling favours: 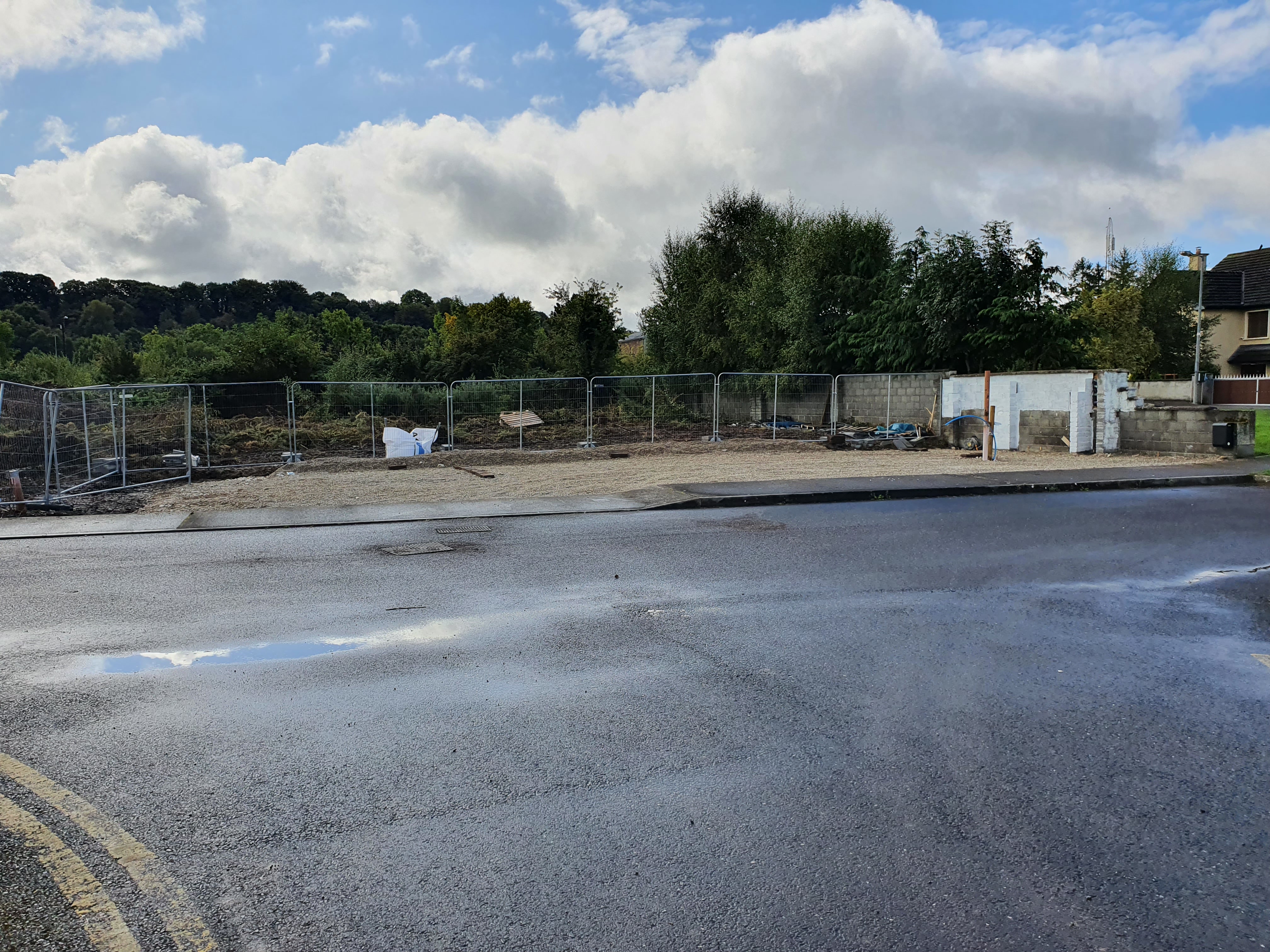 Due to being so busy, they could only spare me two days and those cost me more than six grand, but it certainly leapt me forwards a bunch. I got services ducting extended from their entry points at the driveway over to the western wall, specifically mains electricity, broadband, mains water and sewerage. 300mm of hardcore, crushed rock and a thin layer of gravel have been laid down. They felt that my wall was likely to fall down, so they pinned it with a new support column, which was made wide enough to plinth the solar inverter whenever it arrives, and they built up structural support for the far end which I had left open because concrete foundations needed putting in. That, in turn, meant I could seal and finish the ESB meter box, and it enabled me to install a 40ft shipping container: 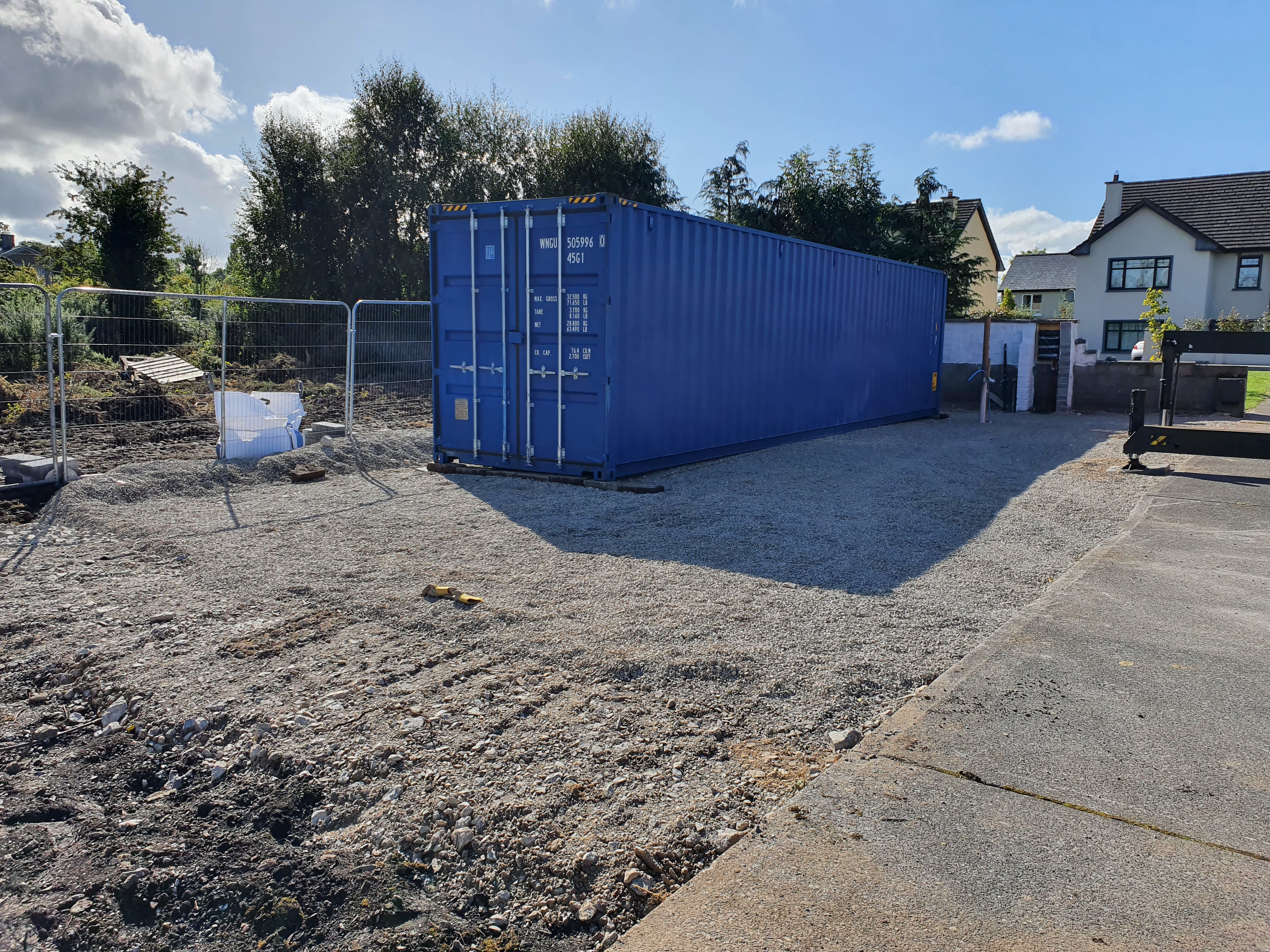 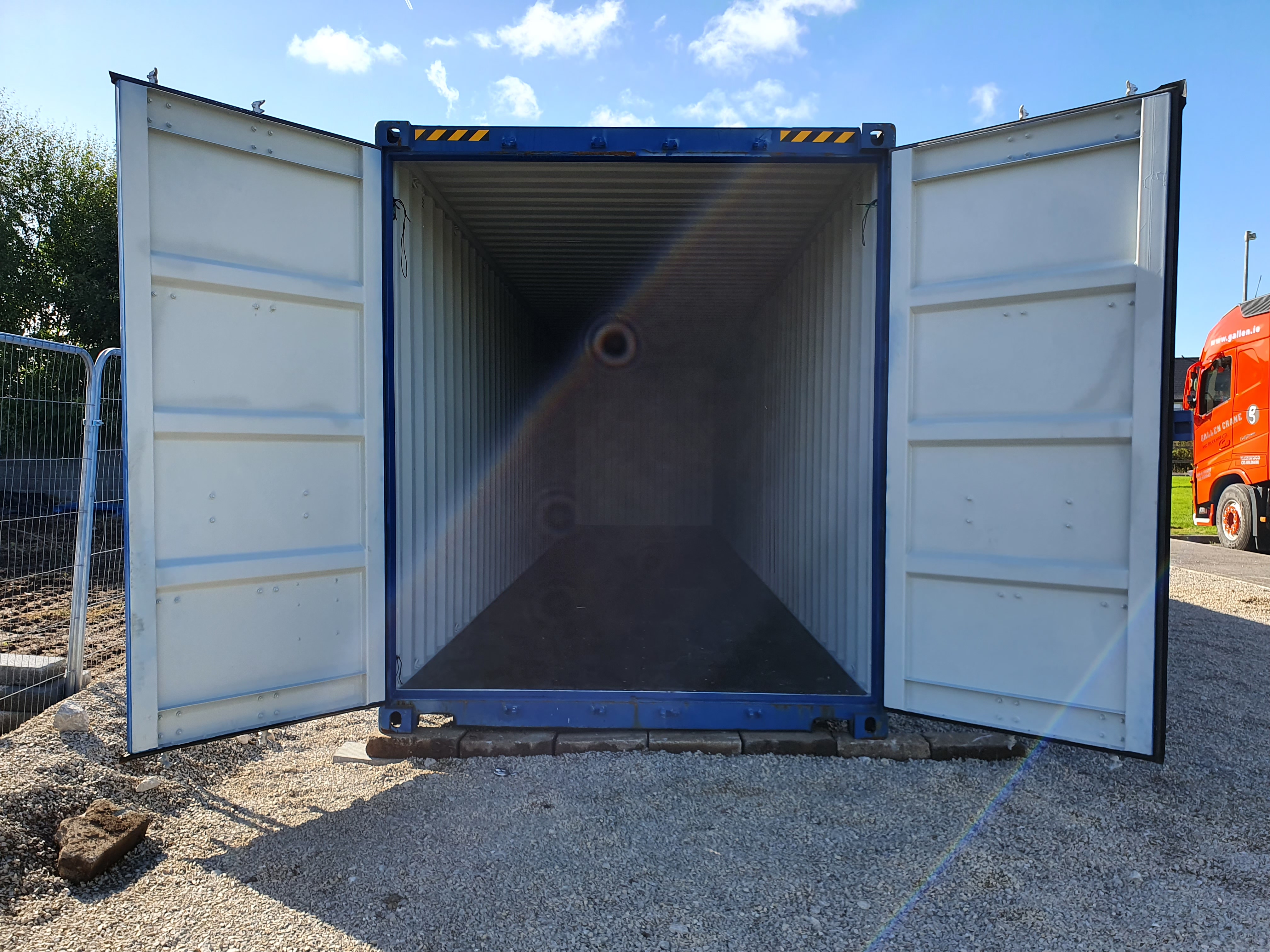 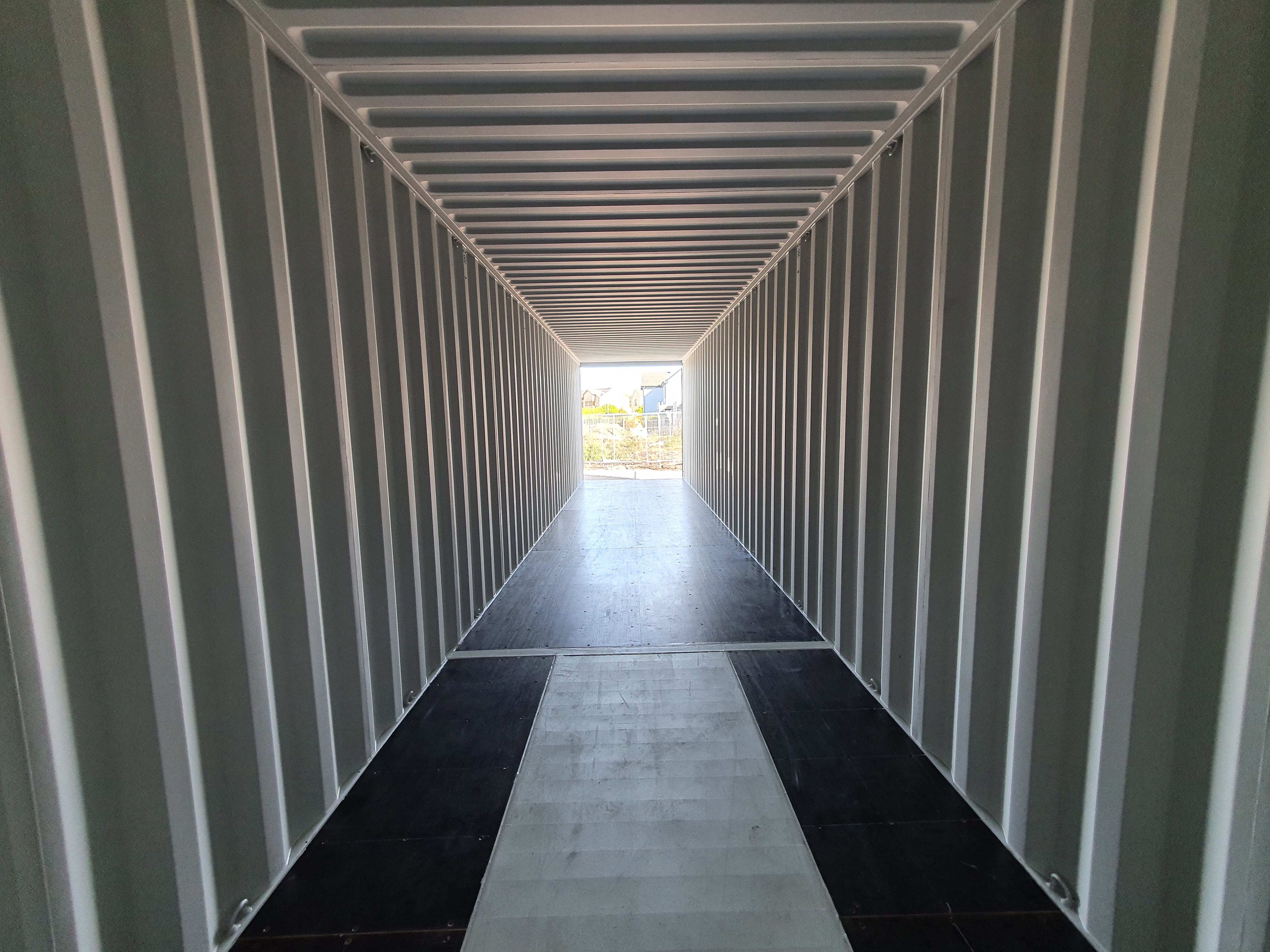 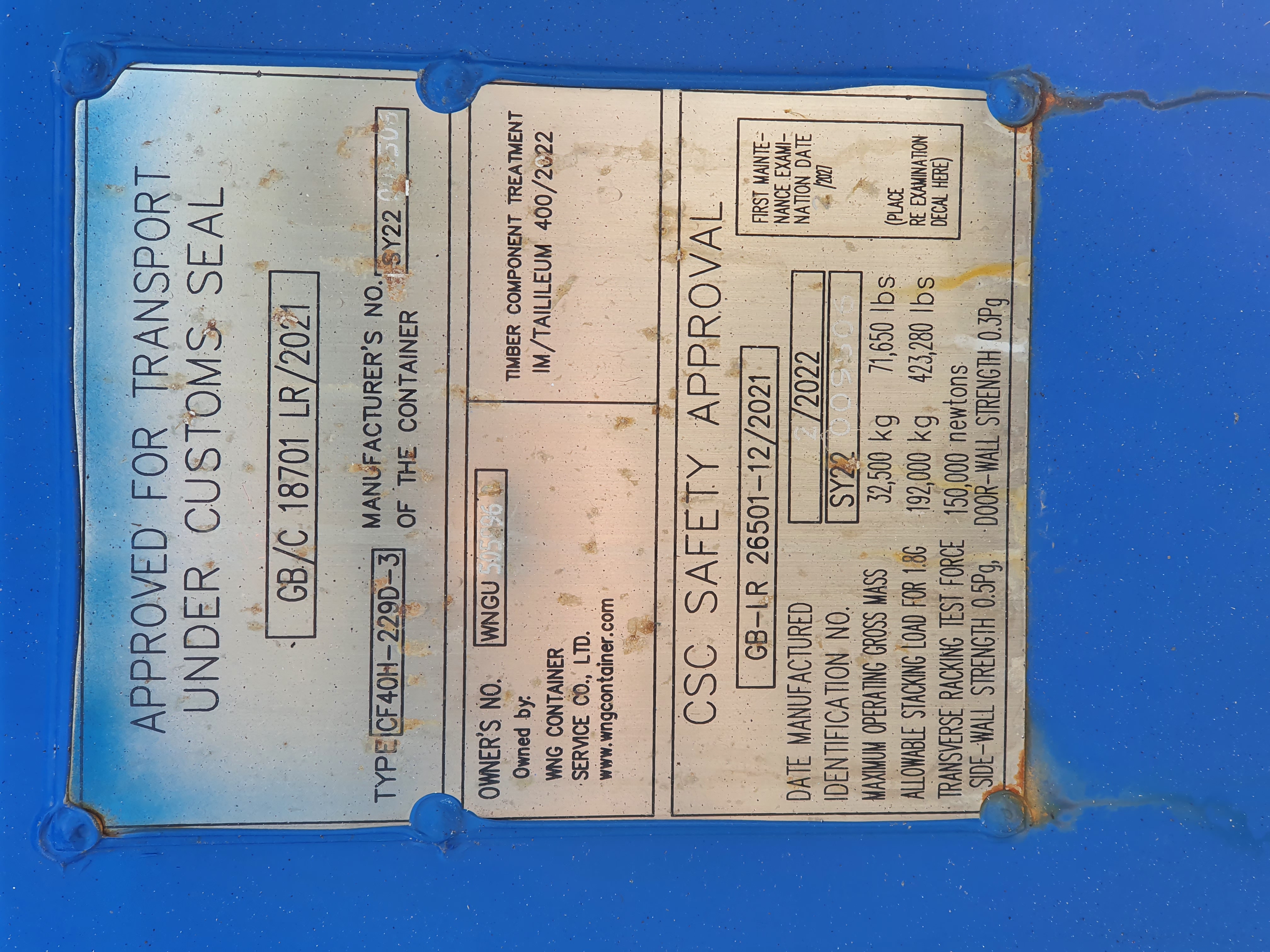 This shipping container unblocks a vast array of other things as I finally have secure storage onsite – it was a critical blockage point, and without it not much else could proceed. As the photos show, it is a ‘new’ (once used) unit manufactured in China and it did a single crossing from China to Europe. It was expensive at seven grand, however used units are currently costing €5.5k, plus this specific unit is a High Cube rather than standard i.e. it is taller, and has 14% more space internally. I reckoned for the difference in it the slightly extra cost was worth it for a non-banged up unit that is guaranteed completely clean on the inside (which as the photos show, it is).

Most people now ask why buy instead of rent, as is normal for those in Ireland building a house? The reasons are: (i) I don’t expect to build for at least a year probably two as I wait out the coming recession, and rent vs purchase swaps value at around nine months (ii) I want to modify the container to add internal lighting, an alarm system, and forced air ventilation (iii) as a brand new container with modifications highly desirable by other Irish home builders, it should recoup a large portion of its cost when I sell it years from now.

This coming Monday the portable cabin should arrive, and once connected up that will finally give me a working toilet on the site, which would be amazing. And somewhere to shelter when it rains which isn’t my poor car! I’m going to wire it up so it’ll run off my petrol generator for the time being, then I can make cups of tea etc whilst sheltering inside from a deluge, which are common in Ireland. I have a small heat recovery ventilation unit coming for it, once I get electricity being generated onsite it should stop the cabin going mouldy as portable cabins tend to do if not frequently used.

Last few months I’ve been having to load everything in and out of my car per journey, plus my small rented house has been filling up with stuff purchased for the house. Being able to get some of that (the non-expensive stuff) out stored onto the site where it’s exclusively used would be most convenient and save considerable time not unpacking and repacking the car each time. Also, I was now able to order the solar inverter, the lithium battery storage, and the solar panels for the house as I finally have somewhere to store them. When they arrive (likely months from now, there are severe shortages of these items) I should be able to mount twelve of the panels onto the roof of the container, and that should generate 15 kWh of electricity per average day in December. That should be enough to space heat the portable cabin and run my work computer, and every month which isn’t December will generate far more electricity. I could just install mains electricity, however why pay its standing charge when I don’t have to?

In the past month or so I’ve found weekends and mornings before work to finish the construction of my wall, and because its mortar is so unstable due to my mistakes I needed to ensure it wouldn’t wash out with the winter rain, so I got a base coat of paint onto the inner side and I applied a cement and water paste to the outer side to seal the wall. 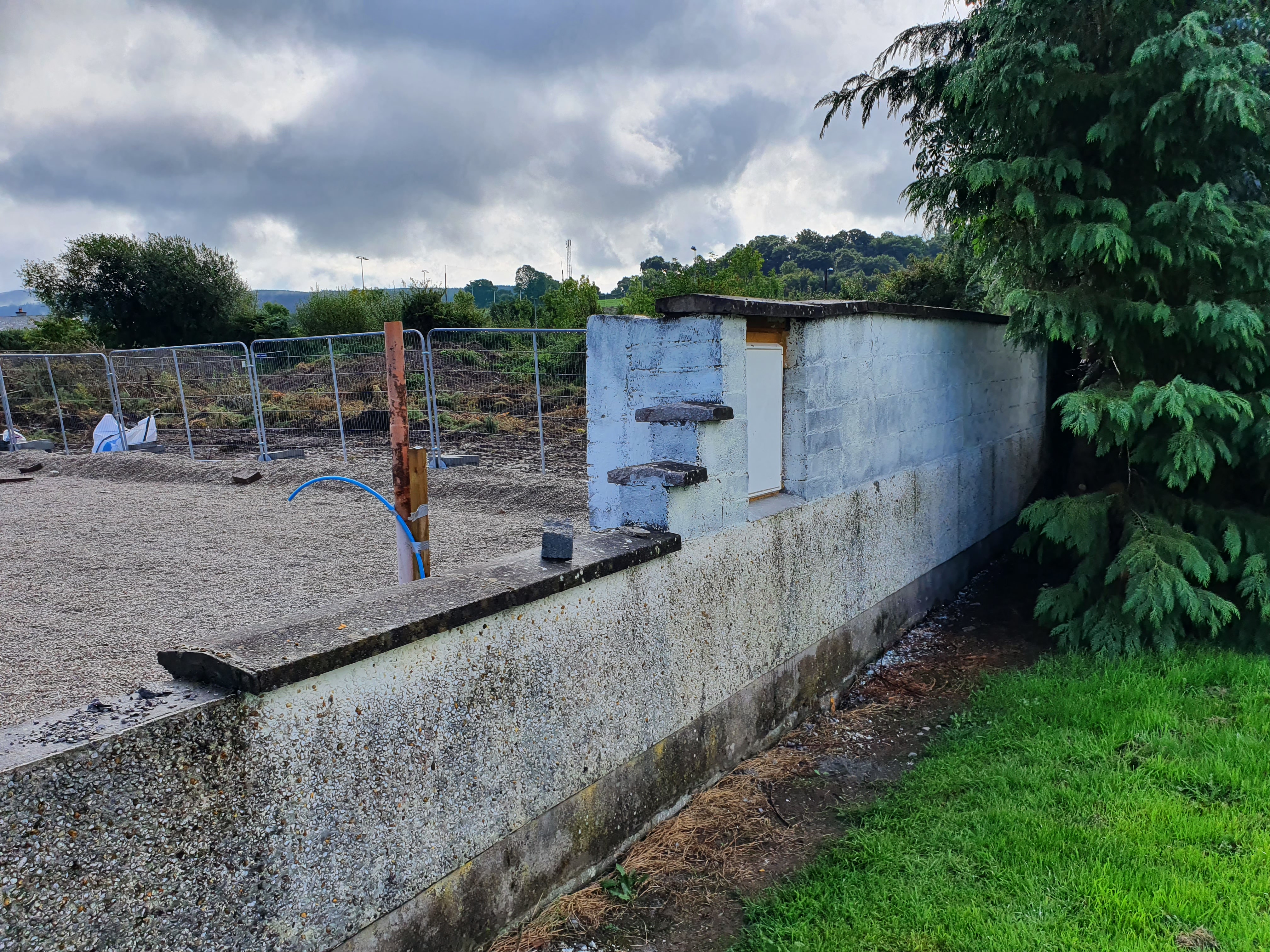 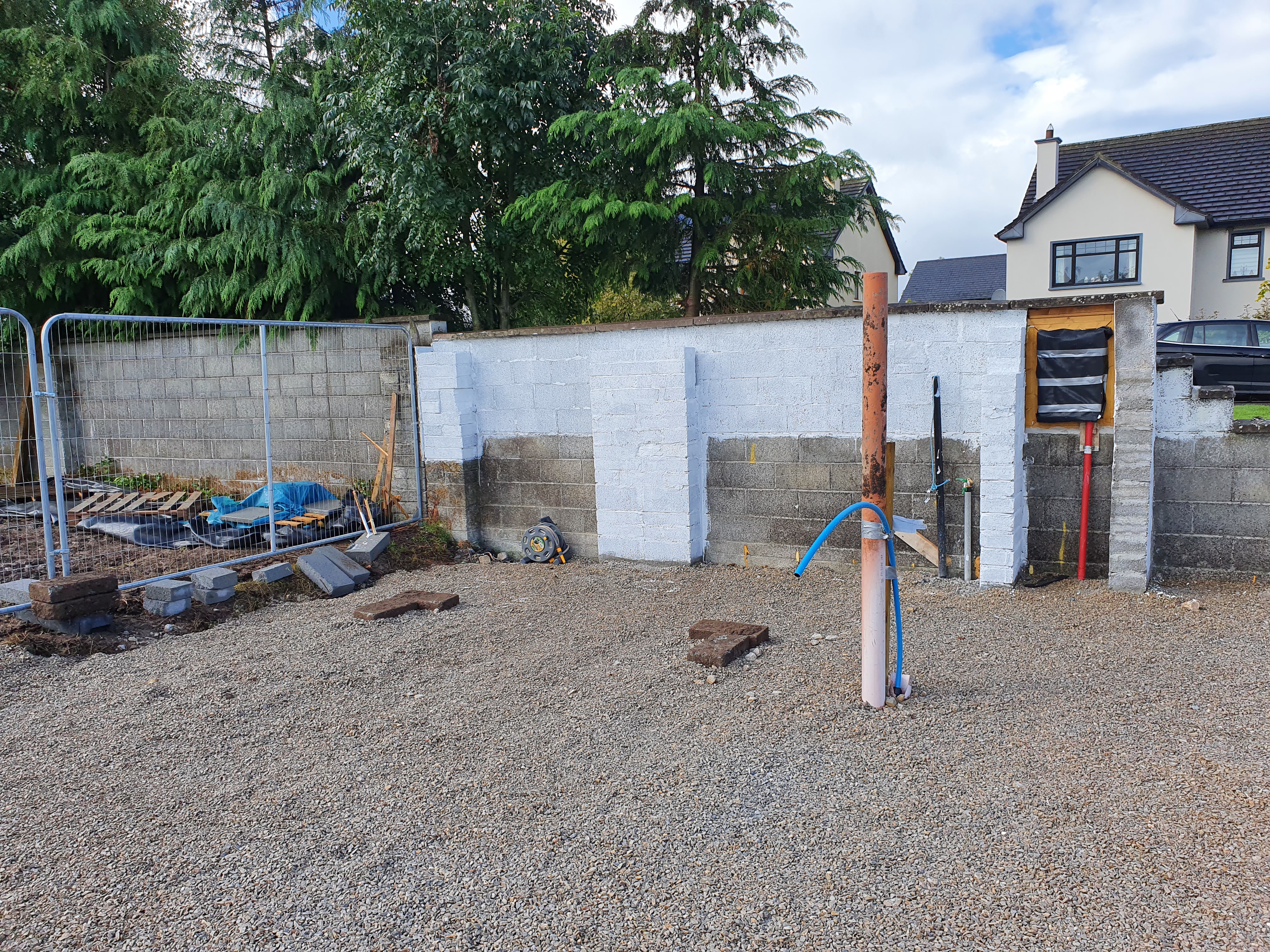 I’ll get two full coats onto the inner side before winter I would hope, weather permitting, and raise a one meter wide roof along ten metres of it which corresponds to the future outhouse. I’ll then be ready for whenever/if the solar inverter turns up to mount it onto the wall (you can see its plinth above).

Despite the delays in delivery of lots of critical bits, I suspect the single biggest constraint going forth will be my free time. I hope to invest as many mornings before work and weekends as I am either capable of or am allowed to. I’ll get there eventually, and once ready it will become my new place of work so I no longer need to work from home.

That is obviously rather a lot of money and most definitely is not sustainable – I am quite well paid, but burning twelve grand per month above living costs is very far beyond my means. The only good news is that this three month cash burn rate probably has peaked and will not become so high again until the main house build gets its deposit paid for it. And, I suppose when the inflation rate causes your cash to lose over 10% of its value per year, one of the best value preserving things you can do is get rid of your cash by swapping it for things which don’t lose their value as quickly. I certainly have achieved that anyway!

Apart from all the bitty stuff of wiring things up onsite etc, the next big thing is getting a mortgage application submitted. It is blocked on my company accounts and my 2021 tax return being completed. Hopefully that should happen soon, and we can set that ball rolling. Current backlogs mean we shouldn’t find out what our Approval in Principle value will be until maybe late November. Depending on what max borrowing limit they return, we might start searching harder for builders, or we might kick the can down the road for a year before trying another mortgage application and hope the house building cost proposition has become less insane. We shall see!