Sunday 19 June 2022: 22:29. A little later than usual due to me being so busy recently, here is the annual update to my periodic comparison of storage bytes per inflation adjusted dollar for magnetic hard drives, flash SSDs, and Intel Optane XPoint devices (you can find all the past posts here), which I have done every June since 2012: 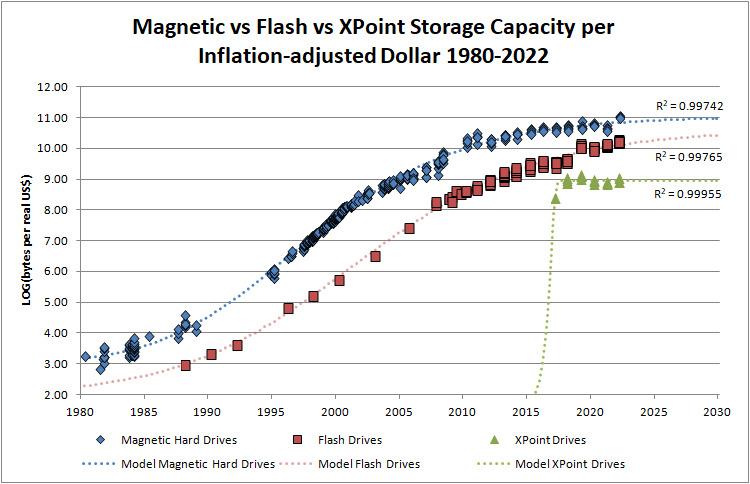 This time last year I predicted:

I expect this time next year hard drive prices will have dropped back onto their long term trend line, and SSD prices perhaps will be flat. We shall see!

I called it right for hard drives, but I called it wrong for SSD prices which saw a better than trend improvement. Optane remained not just flat, but inflation adjusted flat which means Intel are proactively marking up Optane’s price with the inflation rate. Which explains why Optane remains a niche technology, as the performance per dollar gap between it and SSDs continues to grow

Inflation in the past year in the US was something like 8%, so it is surprising that US dollars buy more hard drive and SSDs given the lack of inflation in the East where both are made. However, most raw materials and international trade is denominated in US dollars, so maybe inflation in the home market doesn’t necessarily mean loss of purchasing power outside it. After all, nobody is getting paid more, so Americans are getting poorer quicker than the Asian manufacturers whom only have to deal with raw material and energy price increases. In other words, the West is getting poorer quicker than the East because the West is seeing more generalised inflation, and I suppose that translates into a transfer of relative wealth from the West to the East. Thought about in those terms, I guess price drops could make sense from a Western relative viewpoint.

Looking forwards, it seems all but inevitable that price inflation will exceed 10% in the US and maybe even in the EU, though in Europe non-energy non-materials price inflation is being tamed by war’s effects on energy and materials supplies where outright lack of availability at any price means GDP is impacted, and that in turn dampens price inflation because the economy is weakened overall. I suppose where things get interesting is that lack of energy and materials supply also pushes up prices in the East, so I would assume that where computer components get manufactured is going to become rather more like Europe in the next twelve months i.e. everybody getting noticeably poorer because the cost of living substantially increases. That, in turn, probably means less demand for hard drives and SSDs, but also increased costs to raw materials and wages, so I’m going to suggest that both hard drives and SSDs will improve again this time next year as surplus capacity fights cost of manufacture.