Saturday 29 May 2021: 22:44. It is almost June, so here is the latest update to my annual comparison of storage bytes per inflation adjusted dollar for magnetic hard drives, flash SSDs, and Intel Optane XPoint devices (you can find all the past posts here), which I have done every June since 2012: 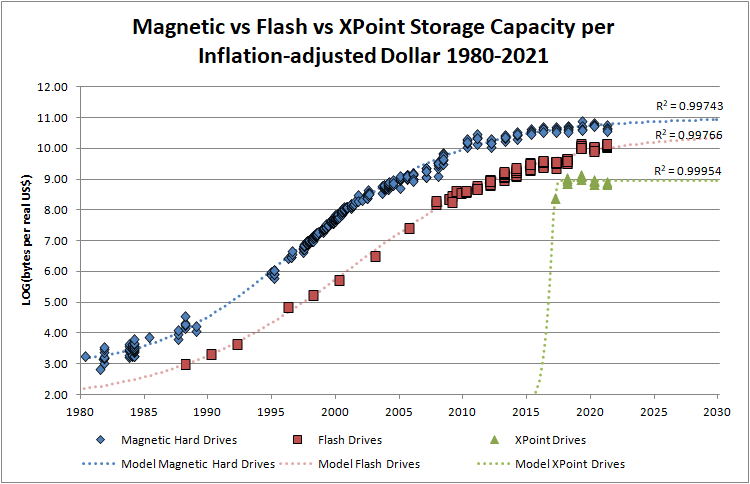 This is an unusual year, hard drives are about one third more expensive this year than they were last year (I am very thankful I replaced earlier this year all my hard drives with 3x 16 Tb Seagate drives, I clearly timed the market beautifully). Yet, SSDs are one third cheaper than last year, which is an unusually good annual improvement which appears to have undone last summer’s SSD price increases. Meanwhile Optane X-Point is completely flat – not just nearly flat, but absolutely identical dollar prices to this time last year, only the effect of inflation very slightly improved their bytes per inflation adjusted dollar. Clearly Intel feel no need to bring NV-RAM to the mass market until competing products launch and force them to compete on price

, which hopefully will be soon.

So why have hard drive prices increased? Everybody is blaming Chia mining which is a cryptocurrency based on pointlessly wrecking hard drives into landfill rather than pointlessly converting electricity into heat like Bitcoin. The Chia network is currently consuming 1.2 Exabyte at the time of writing, which might sound a lot, but it’s only 75,000 16Tb hard drives, which is a rounding error on annual production. So I suspect the true cause is the same as why car production has stalled, as has CPU production and graphics card production, it’s due to the global shortage of silicon chip production in general. And no doubt somewhat related is the post-pandemic steep rises in the price of copper and rare earths, and just that demand in general is vastly exceeding supply.

I expect this time next year hard drive prices will have dropped back onto their long term trend line, and SSD prices perhaps will be flat. We shall see!