Sunday 31 January 2021: 02:09. This is the ATorch DL24, a cheap Chinese battery load tester available from Aliexpress and others for about US$30. It is quite famous amongst internet battery testing enthusiasts, because it offers a comprehensive feature suite for one twentieth the cost of typical battery testers. It will do:

You can program it to stop if voltage drops below a minimum, so you don’t wreck your batteries, or if your battery gets too hot, to prevent explosions. Voltage measurement is now by separate wires in this updated model, so there are no longer problems with voltage droop during high current test loads as found in previous models. It is festooned with connections for ease of testing: Mini, Micro and Type-C USB, plus old fashioned crocodile clips. It can transmit its measurements by Bluetooth, so you can record graphs of battery behaviour over time, just like https://lygte-info.dk/ has. It also has a very nice colour display panel which shows present measurements, and summary measurements. For the money, I came away impressed, though I would hesitate to push more than half its claimed maximum wattage (150W) through it (you can find some entertaining Russian videos on YouTube with this exact model not coping well with 150W of power going through it). 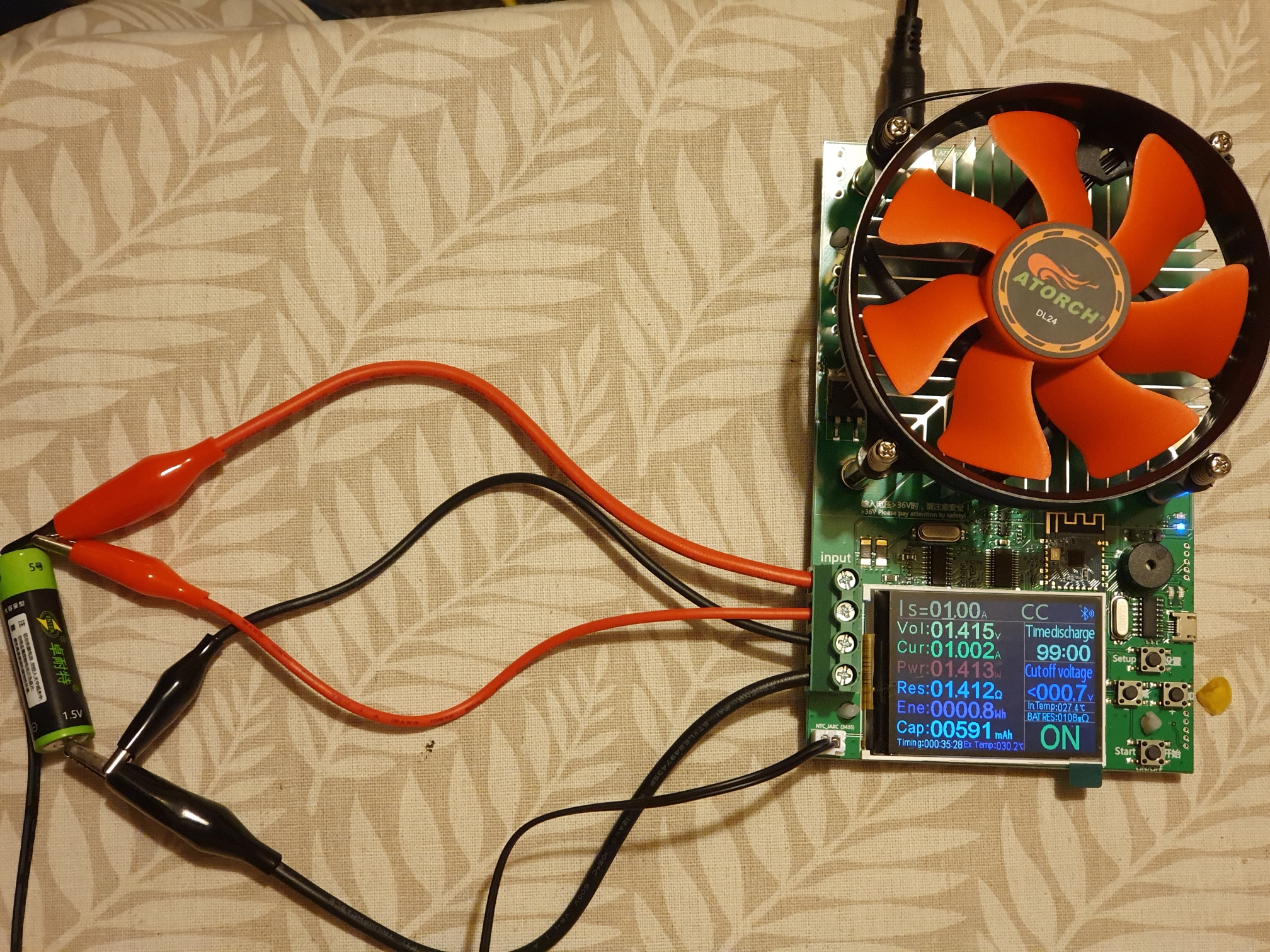 For my purposes of testing my next generation lithium-ion USB rechargeable AA and AAA batteries which I covered a few posts ago, it is absolutely fine as I won’t be testing more than one ampere at 1.5v, which is of course 1.5W, or 100x lower than the claimed maximum. Indeed, during my testing, the heat generated was so low than the fan didn’t even turn on.

Anyway I did not go nuts testing these batteries, so I don’t have a lot of samples. This is because I could only leave it run after the kids went to bed, but I had to tidy it all up before I went to bed, and this limited total testing time possible to a few hours, which necessitated higher load currents under test. So my results are rather for higher currents than is fair to these batteries, as lower current draws will show more battery capacity, by definition. Still my results essentially match those of lygte-info.dk, so I can confirm that my AA ZNTER batteries are absolutely identical to that specific Blackube branded USB battery:

The higher results for lygte I think are because he has much thicker, higher quality, testing wires than I do. At 0.4A, the gap between my results and his drop markedly, as you’d expect from thinner wires, and if I had had the time to run a 0.1A test, I’d expect mine to be very close to his.

An interesting additional data point is the approx 8.4% capacity loss over a month since charging. I’d love to know if this is due to the lithium cell, in which case the loss will be inverse compounding, or due to the microprocessor handling the voltage conversion which would draw down the battery linearly. If it’s the former, the battery will quickly reduce itself to half capacity, but very slowly reduce thereafter, whereas if it’s the former, these batteries will be flat within twelve months, which I would imagine would do no favours to the longevity of the lithium cell.

I also tested some of the AAA model, which unlike the AA model does not claim comparable power storage to NiMH nor alkaline AAA batteries:

The self discharge rate here is similar to the AA models at approx 8% per month, and the overstatement of claimed capacity relatve to what I measured is almost identical as to the AA model, at about 15%.

As I concluded in my last post on these batteries, I don’t think these USB rechargeable batteries are quite ready for prime time yet. Firstly, the Chinese really ought to stop adding +12% to all battery capacity claims. It does them no favour longer term. Secondly, these really need to last as long as NiMH batteries do, despite delivering a sustained 1.5v throughout, if people are going to be willing to spend multiple times more to buy them over NiMH batteries. One obvious fix to this is to not deliver 1.5v, but instead to deliver say 1.25v (ideally it would be switchable), and that would deliver a +20% gain in runtime. If they can squeeze a further 20% capacity into the same size profile, now you have a better AA battery in every way, apart from cost.

That’s for the AA size which already has comparable total power (Wh) to NiMH batteries. For the AAA model however, the gap is far larger, currently by about 2x for the higher quality NiMH AAA sized batteries. I suspect this is because the voltage converter and charge electronics takes up much more space, relatively speaking. Given how small those batteries are, how fixed size the converter electronics must be, the AAA size I think will never catch up. Equally, going the other way, C-size and D-size batteries have larger volume where the lithium cell’s much higher energy density really could shine, so for the bigger batteries I can see this next generation technology will become dominant quickly. Not least because few have NiMH C-size and D-size rechargeable batteries as they require a separate charger, and these USB recharged batteries are therefore much more compelling, including containing more power and being much lighter.