Tuesday 9 August 2022: 07:03. Since planning permission was granted for the slightly larger edition of my future house build, progress has been frustratingly slow. 90% of the emails I send to people looking for quotes to give them money go unanswered. If you ring them up two weeks later, they usually saw the email but didn’t get round to replying due to ‘being too busy’ i.e. really they are saying that they aren’t taking on new work. Half the time they say they’ll get back to me next week (to date only one has), the other half the time they straight out say they’re too busy for new work. This also applies to component suppliers, I have been trying to source the Fronius solar inverter with 7.7 kW of high voltage BYD storage batteries which cost €10k or so – for which one might think people would at least like to reply to email enquiries – yet similarly I see a very low enquiry reply rate. I know this is because they are absolutely flying off the shelves right now thanks to the looming European energy crunch, so nobody needs to reply to email enquiries. But I refuse to send €10k to a bank account without anybody replying to email first, so it’s a stalemate (to explain, most of the online solar equipment vendors won’t take credit cards because the ~7% card fee is a lot of the profit margin for large value purchases).

(In case you’re wondering why I am buying the house solar inverter and batteries now which seems rather premature, it is because I need three phase demand in order to get the ESB to install a three phase mains supply. So I need these now if I am to avoid a second ESB mains installation charge, saving me €2k! Besides, the inverter actually lives outside, I’ll be mounting it on the wall I built below)

I have had the power at least to personally progress the bits I can do myself. To that end weekend before last I built my first concrete block wall in more than two decades: 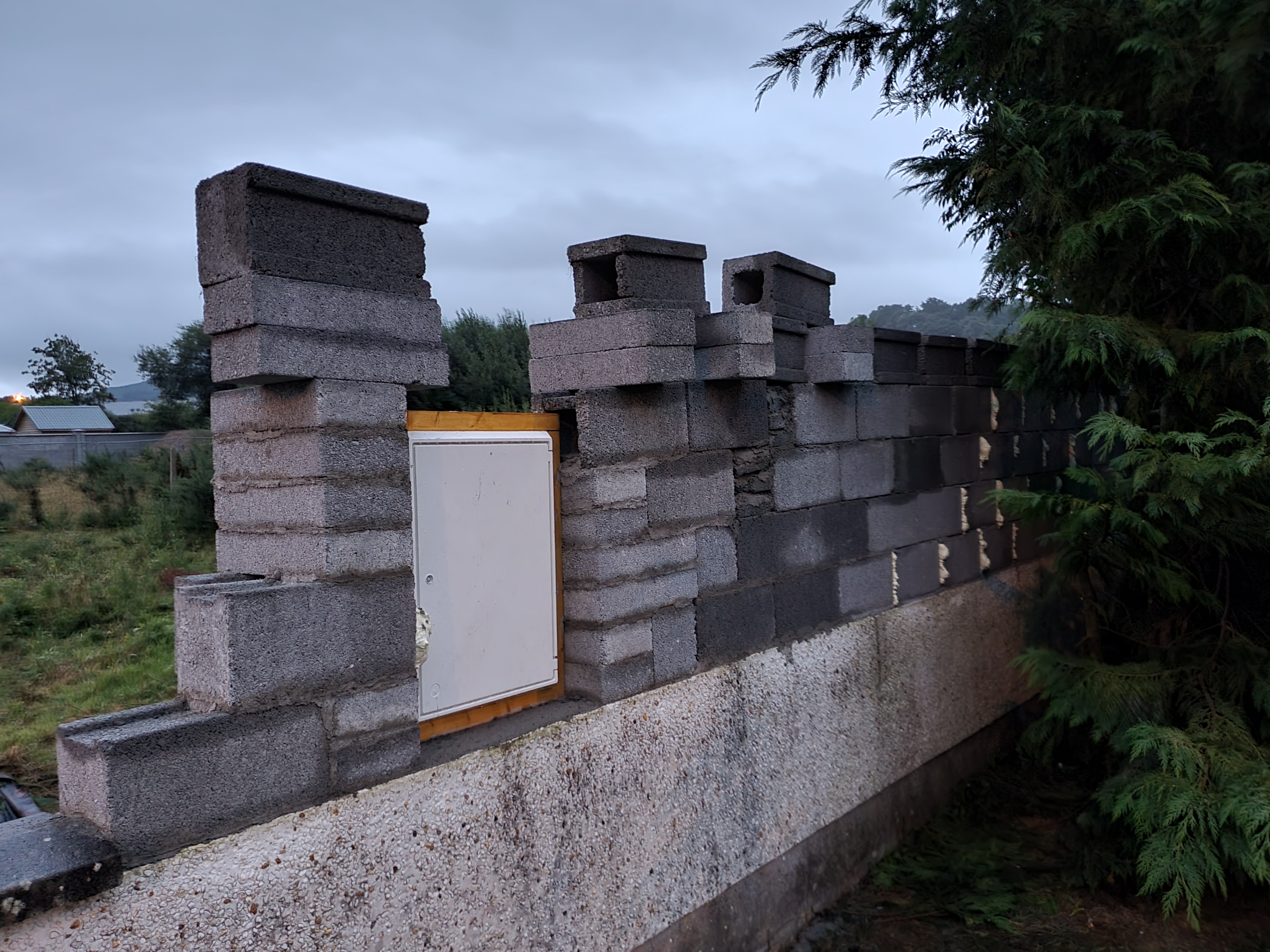 I also got the temporary fencing raised at vast expense (I bought the fencing new rather than rented, it made more sense given how long I expect the build to take): 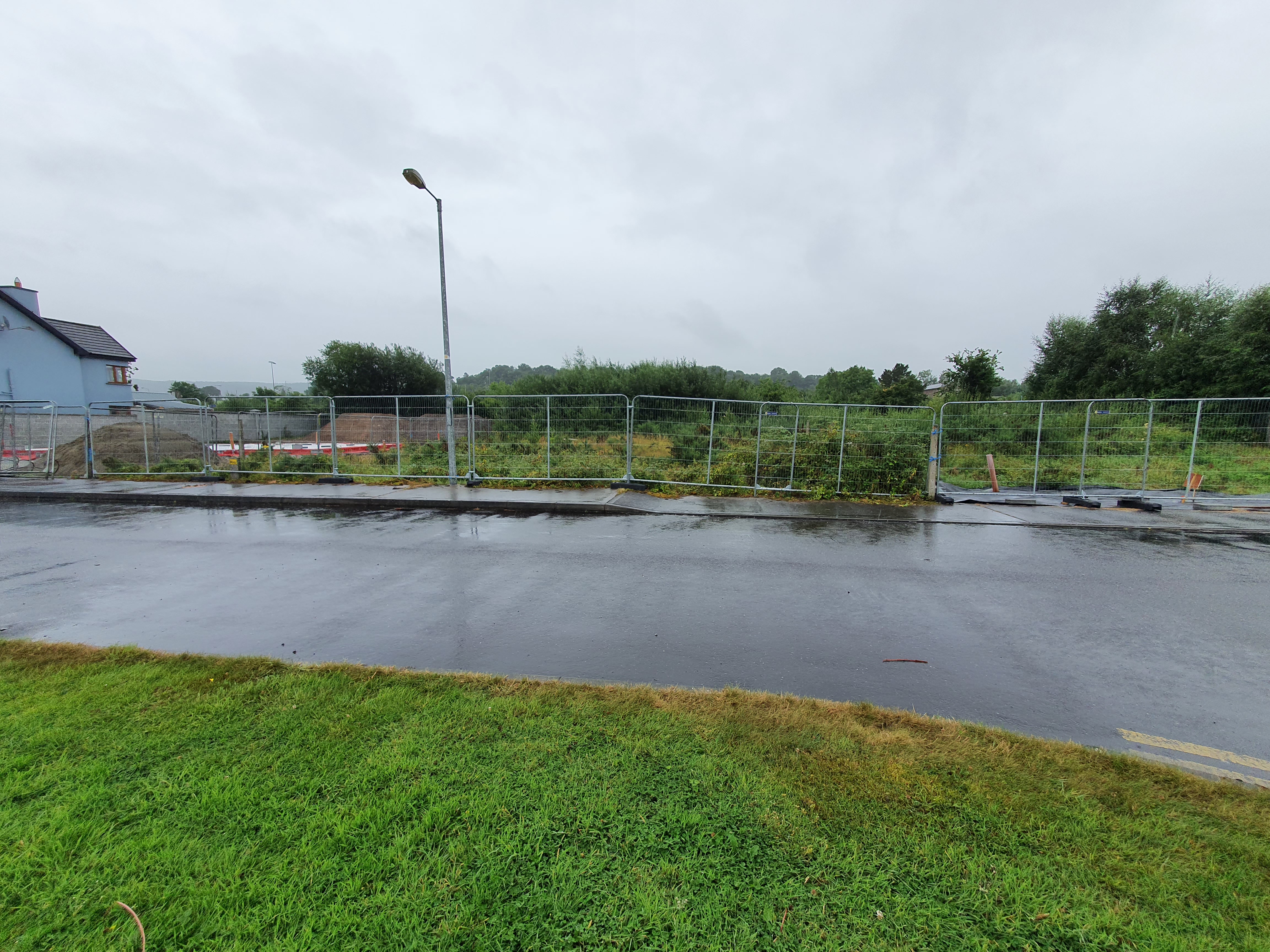 Whilst it was great to actually get stuff done instead of never getting replies from anybody, I am not the right person to be building concrete block walls! I was so slow at it that too much air got into the mortar mix from the concrete mixer, and that in turn made the mortar powdery rather than solid. It would eventually wash out with the rain, and then the wall would fall over, however I will be painting it well before then. It’ll do. I might also add that I pulled most of my upper body muscles, and their tendons all swelled up from the trauma. It was a great way of feeling old, unfit, and somewhat past it.

It’s been three months since I purchased the site, so I can finally issue the first house build spend update! This will be a rolling spend average over the preceding three months, it will give an idea of the ‘velocity’ of the money flying out the door.

This excludes the cost of the site, which was €90,000. The four biggest ticket items in the past three months were: (i) Stamp duty for land purchase (ii) Professional fees (architect, planning consultant, solicitor) (iii) Temporary site office deposit (iv) Aliexpress order of electronics for site lighting and three phase AC to DC conversion.

As I mentioned in the last post, I have spent well over €10k on components, a lot of which were sourced directly from China or directly from component manufacturers as bulk orders. It will cost me time to assemble this stuff by hand, and I need to wait many weeks for all of it to arrive, but it will save me a fortune overall.

Computer renderings of the future house

As mentioned last post, I invested several very late nights into mastering the conversion from Twinmotion into Unreal Engine 5. Unreal Engine 5 does a fair attempt at approximating ray traced quality images yet running at somewhat realtime speeds, at least on my anemic graphics card. I took these screenshots literally from the UE5 game I made of the VR model, and they are undoubtedly better than those from UE4, albeit with a few compromises over the (very slow) ray traced images that UE4 can generate. Note that this is derived from the February 2022 model, a number of small changes were made between this and what was submitted for planning permission.

Let’s start with an aerial view showing the entire site as a bird might see it. The lighting is accurate for April 1st at the exact latitude and longitude: 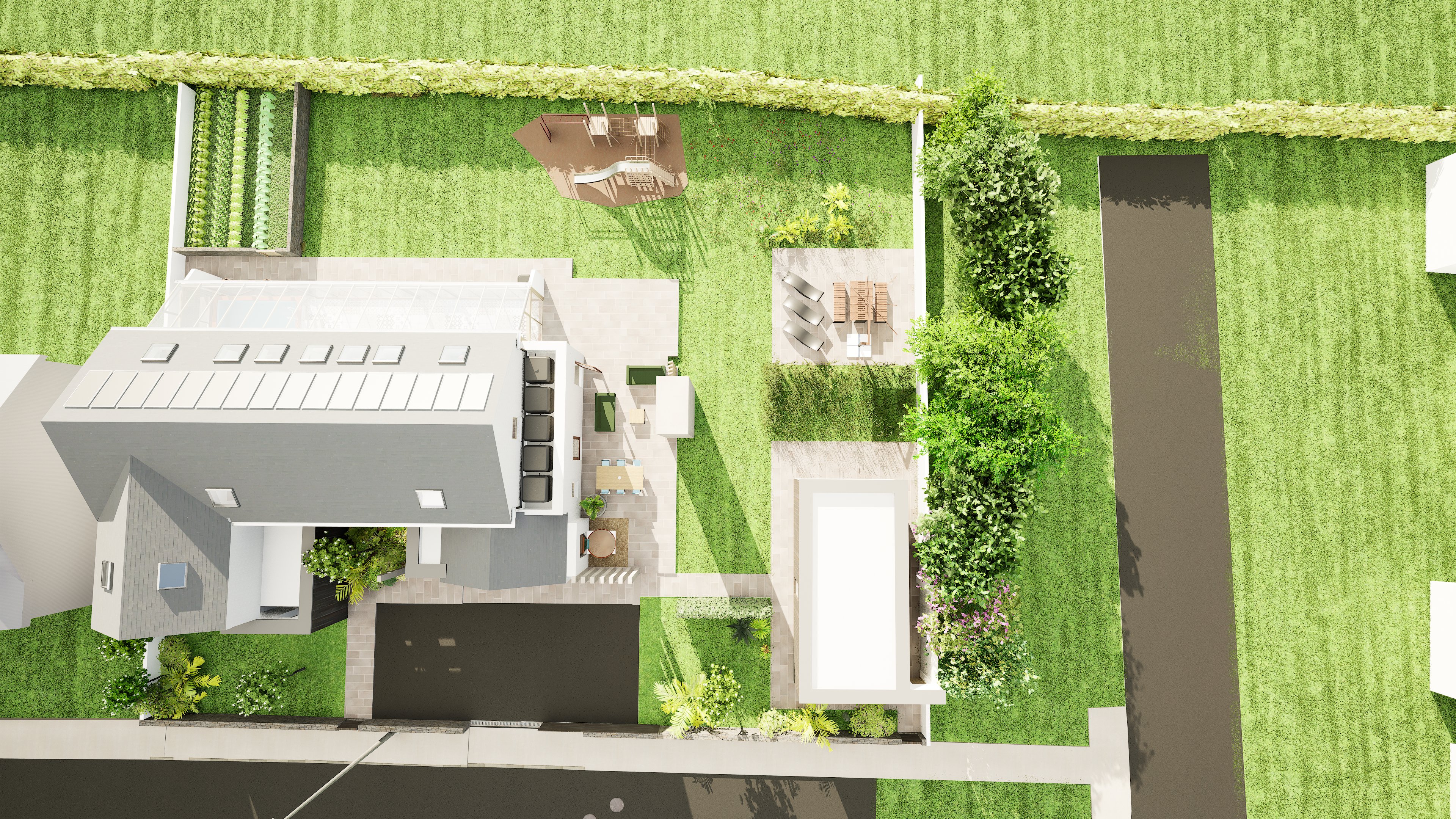 The main changes in what was actually submitted are additional skylights in the master bedroom (bottom right gable), and far more solar panels on the south roof plus more panels on the outhouse roof, as one needs explicit planning permission for so many.

These are the views from the main road looking at the front of the house and outhouse: 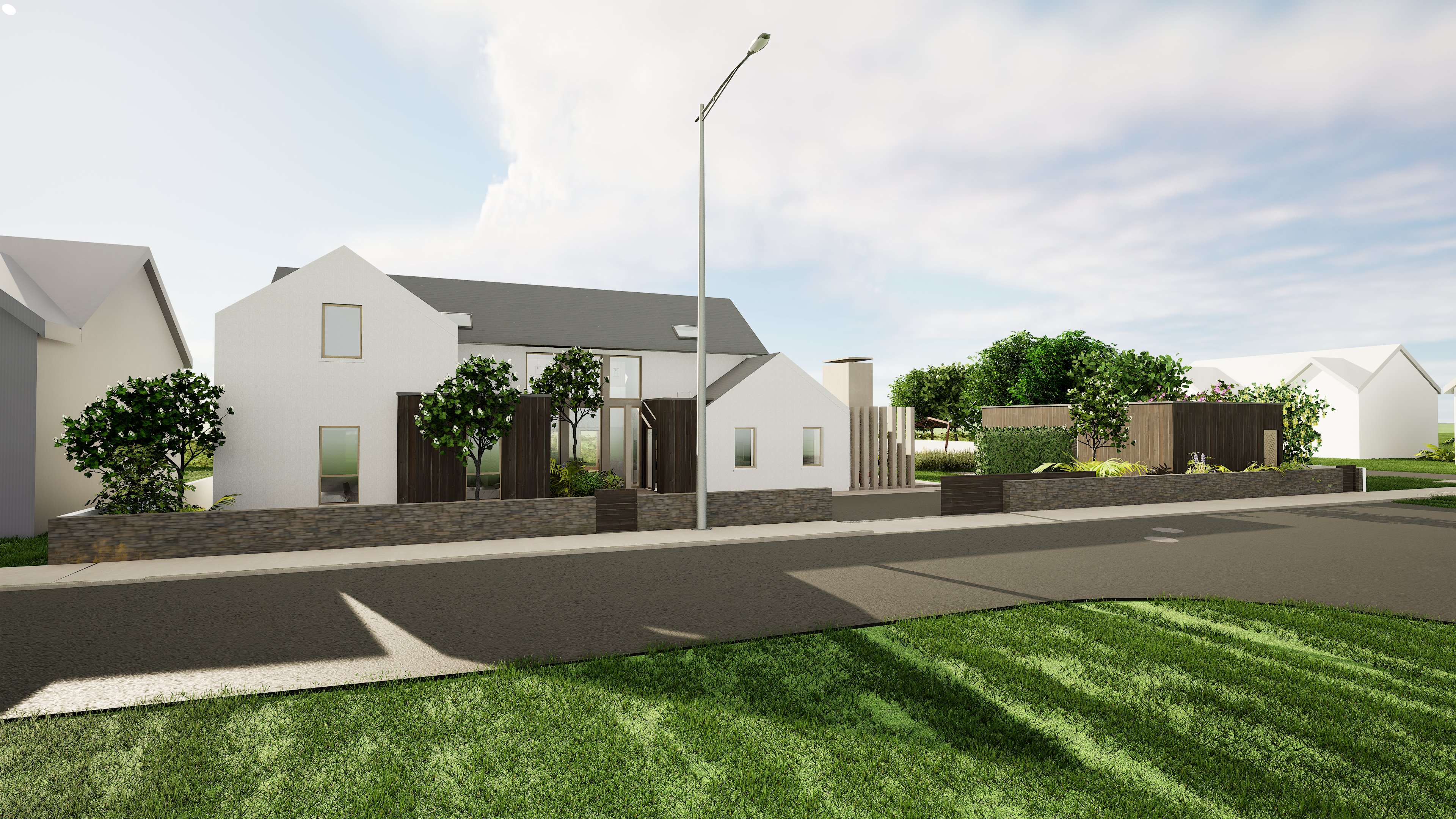 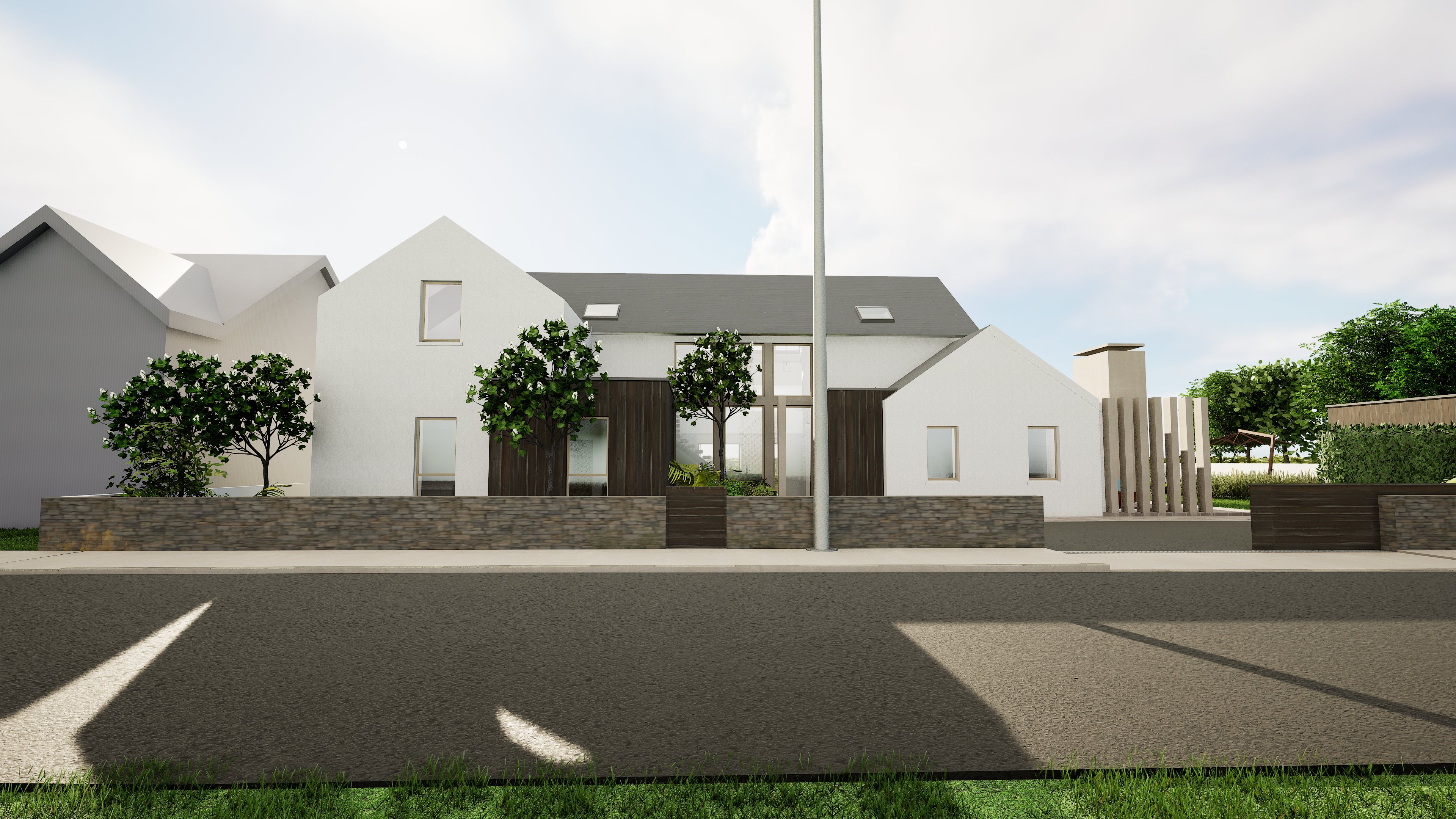 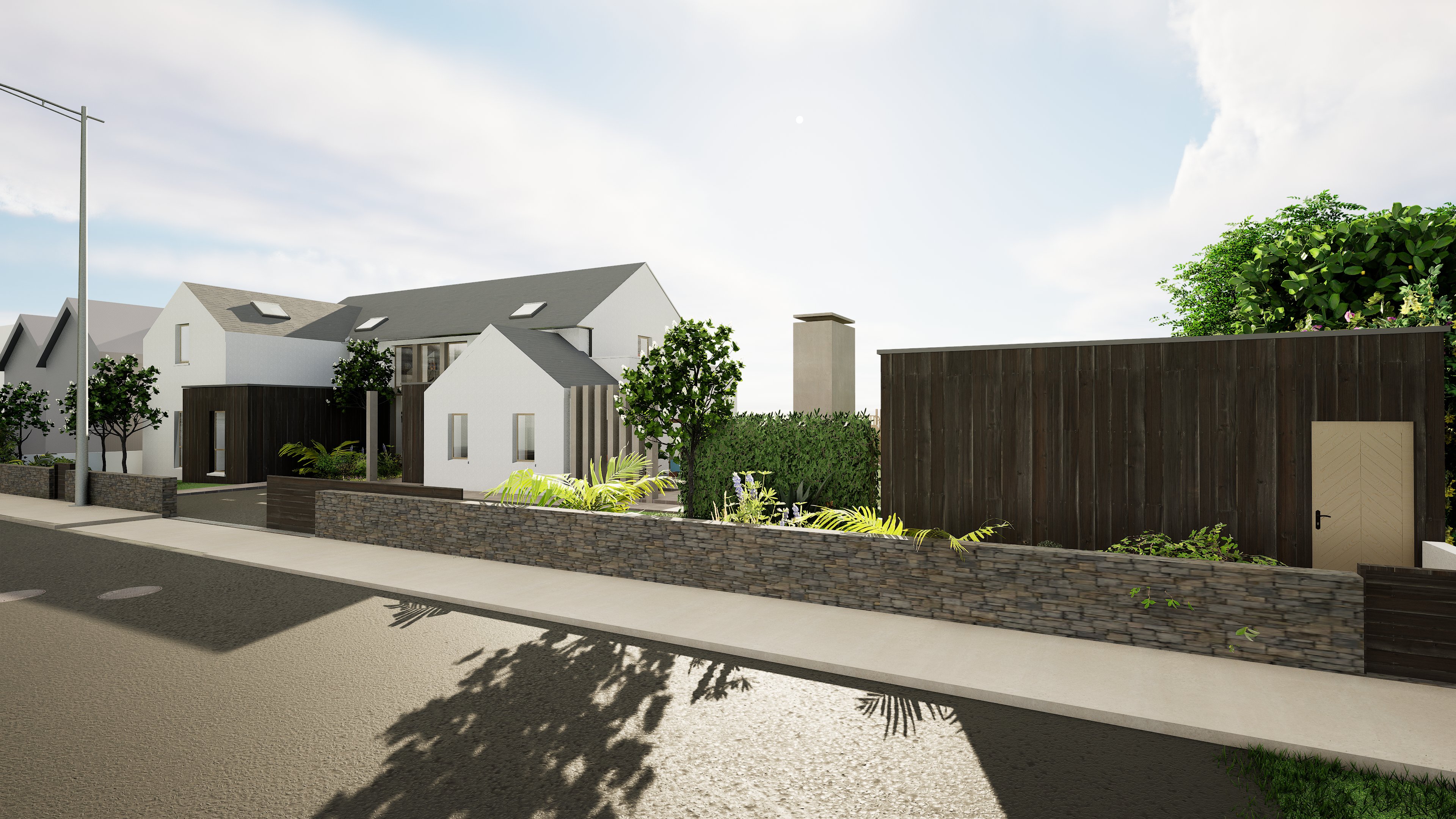 And these are from the back: 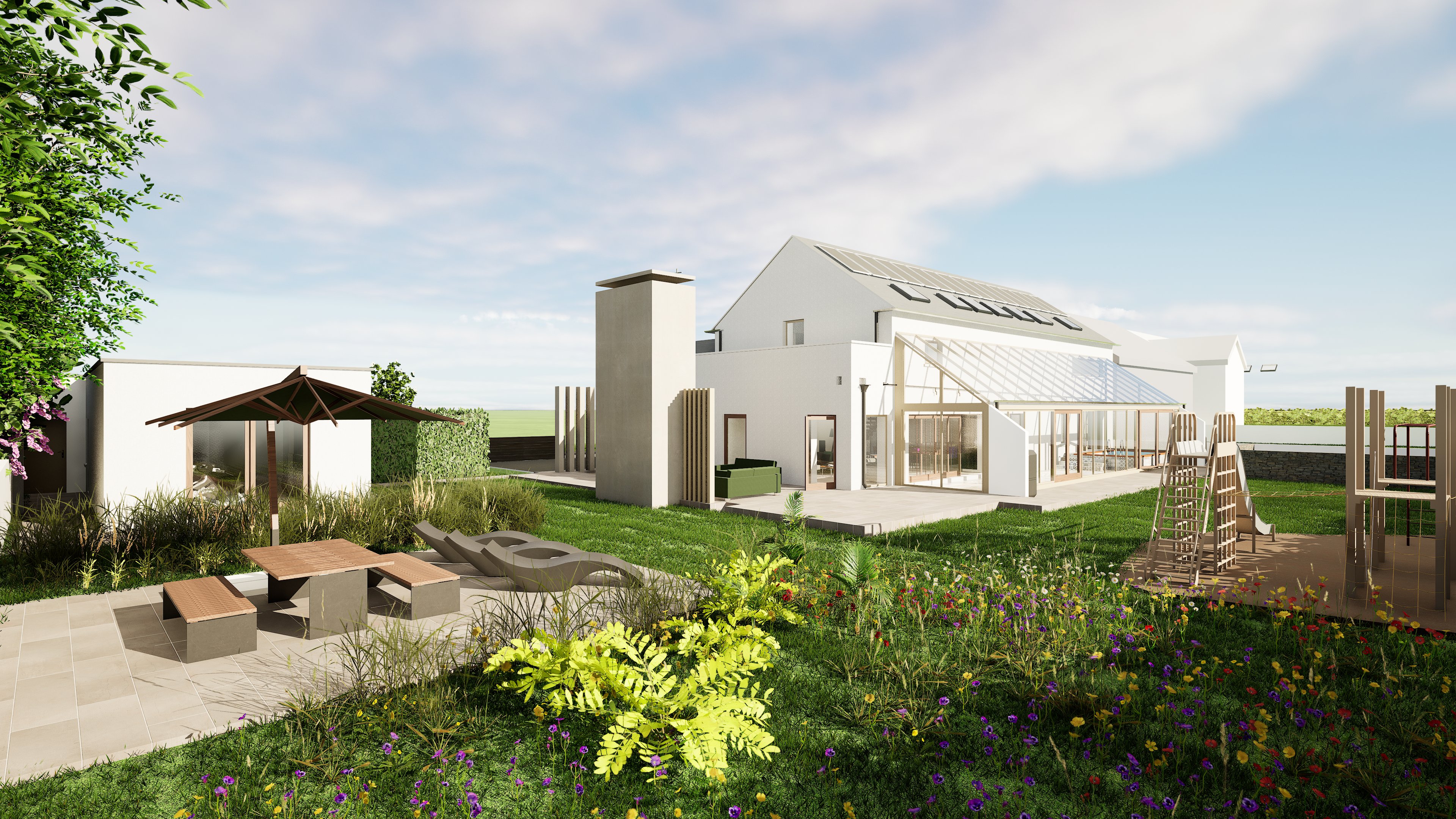 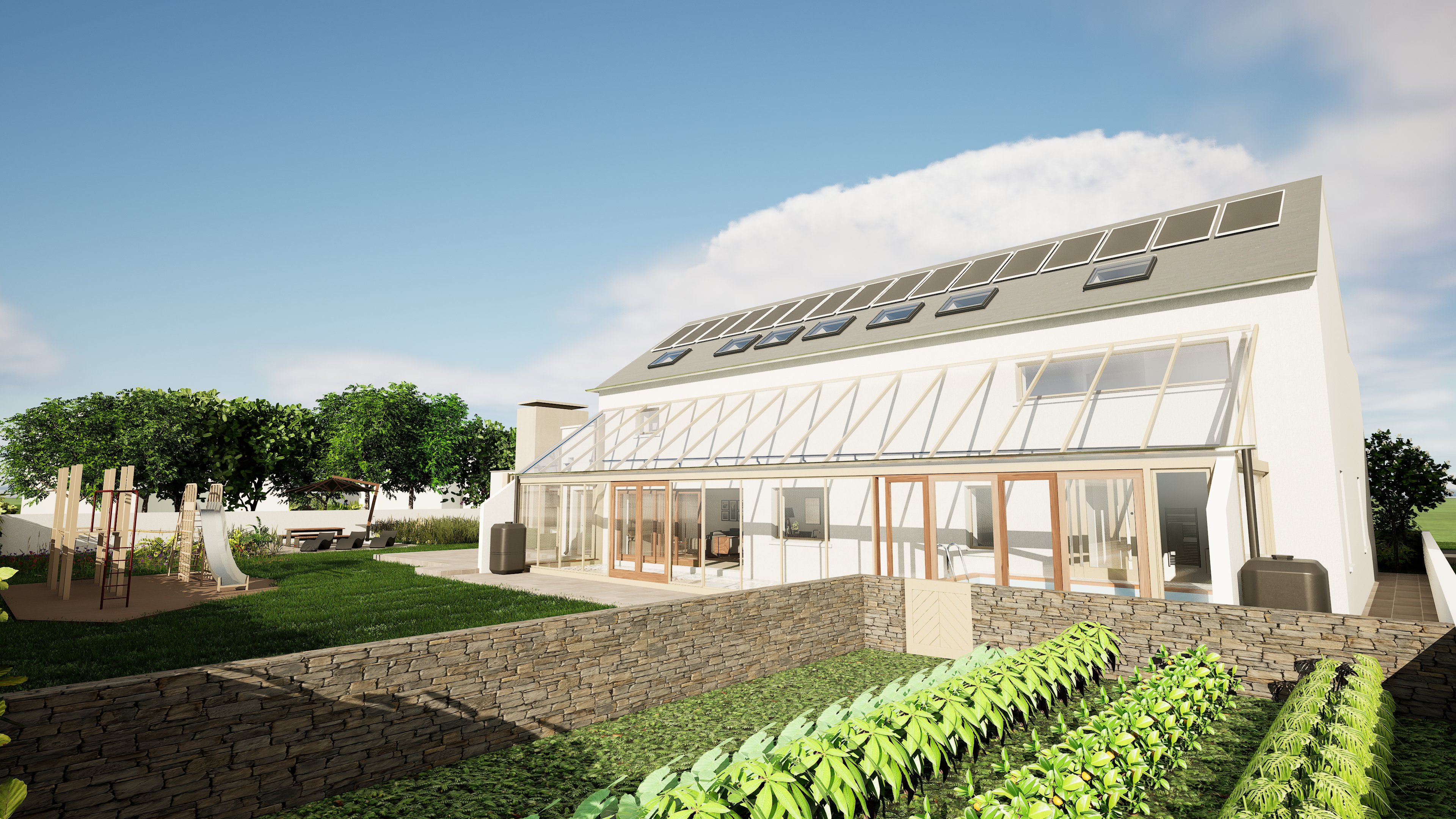 Walking in the front door through the lobby one enters the main living space, first entering the kitchen and then looking up: 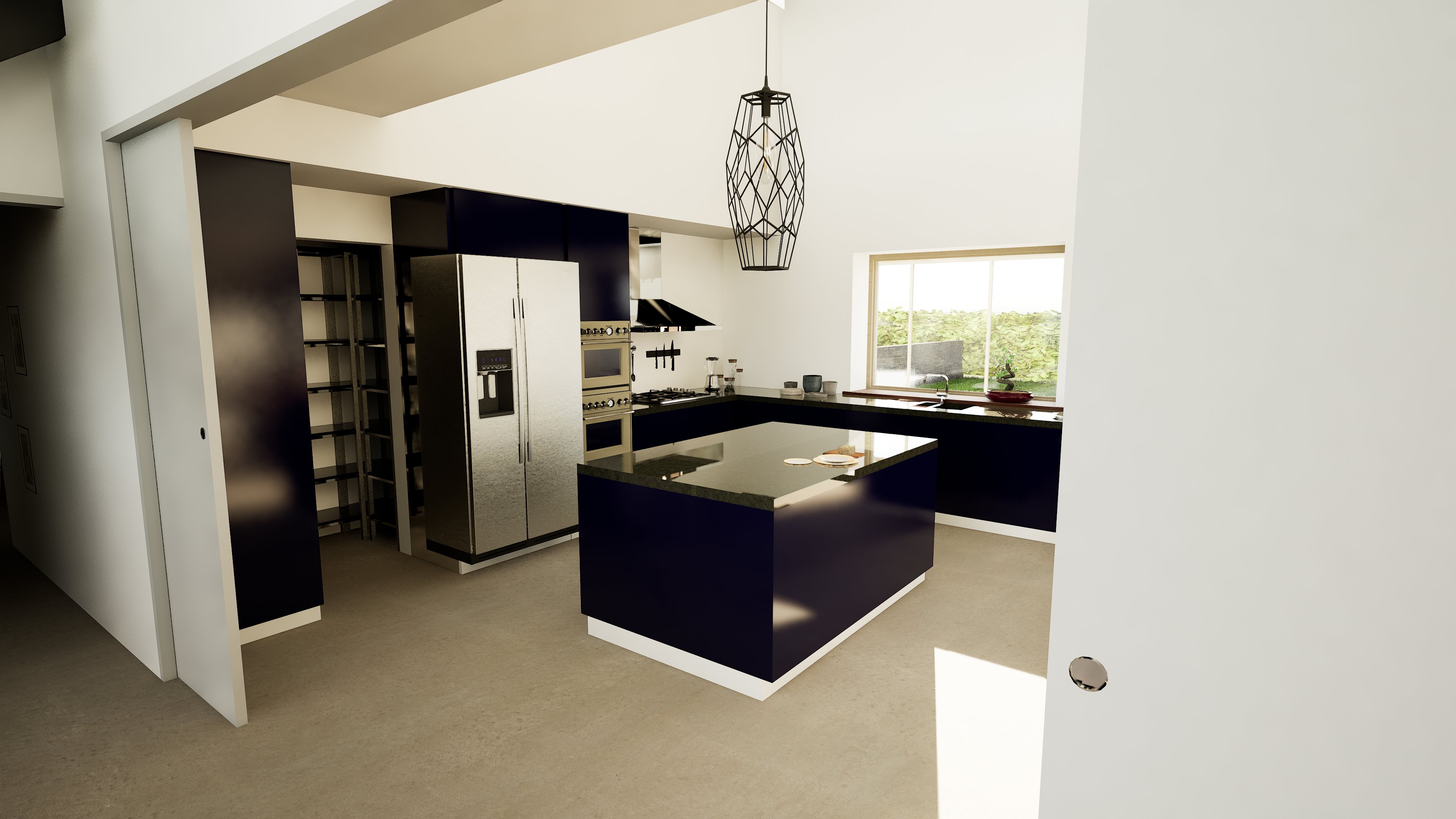 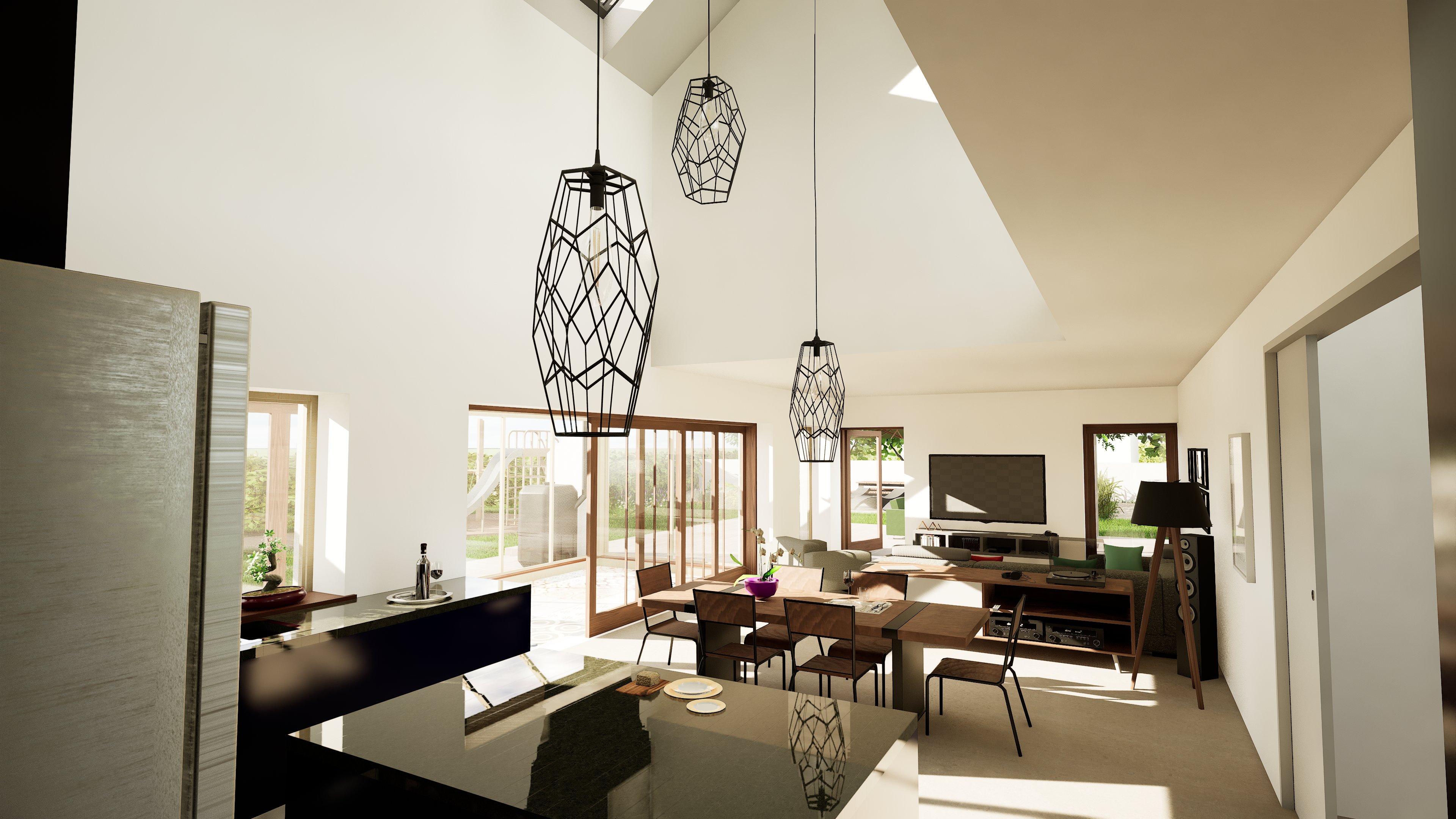 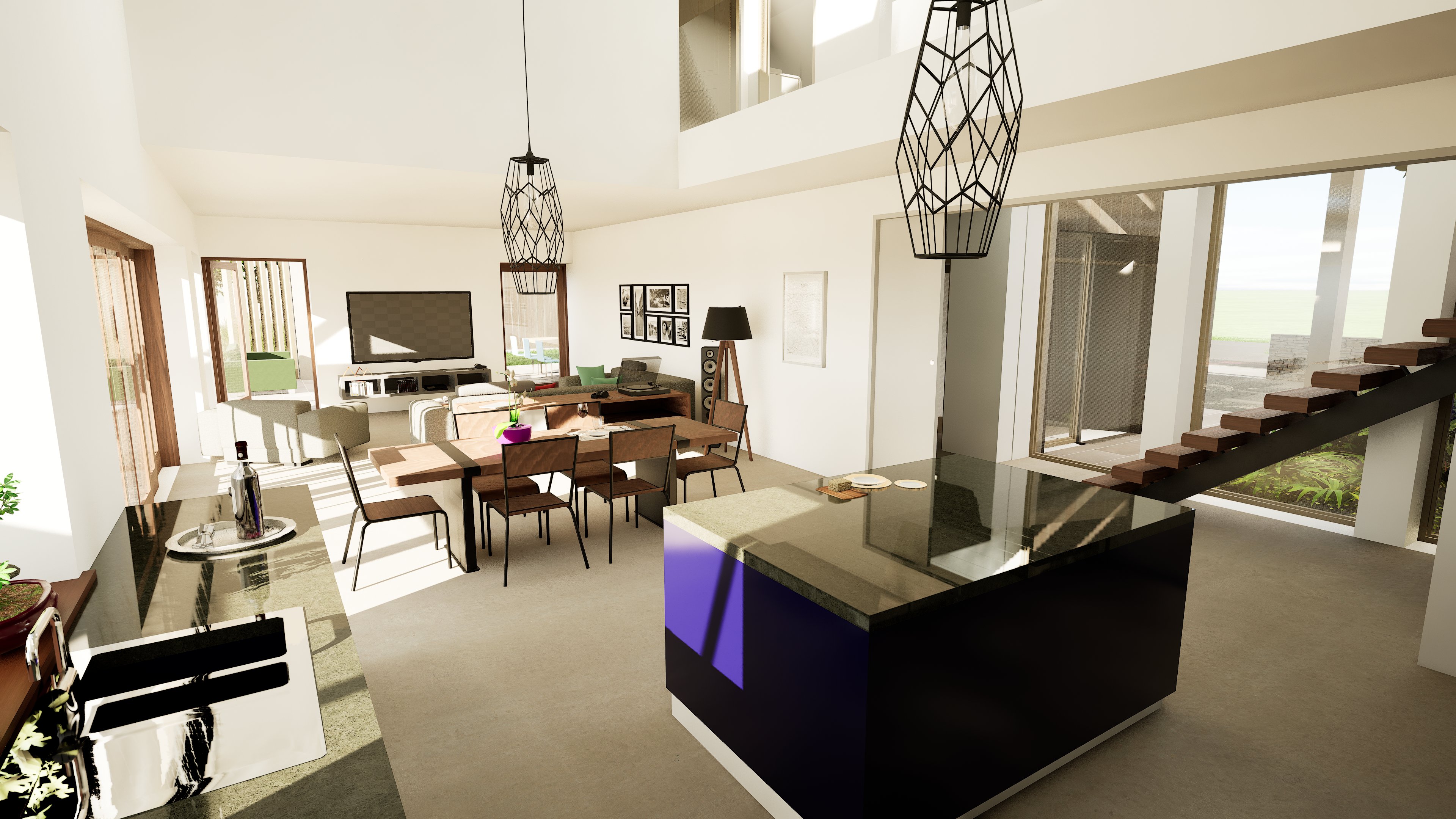 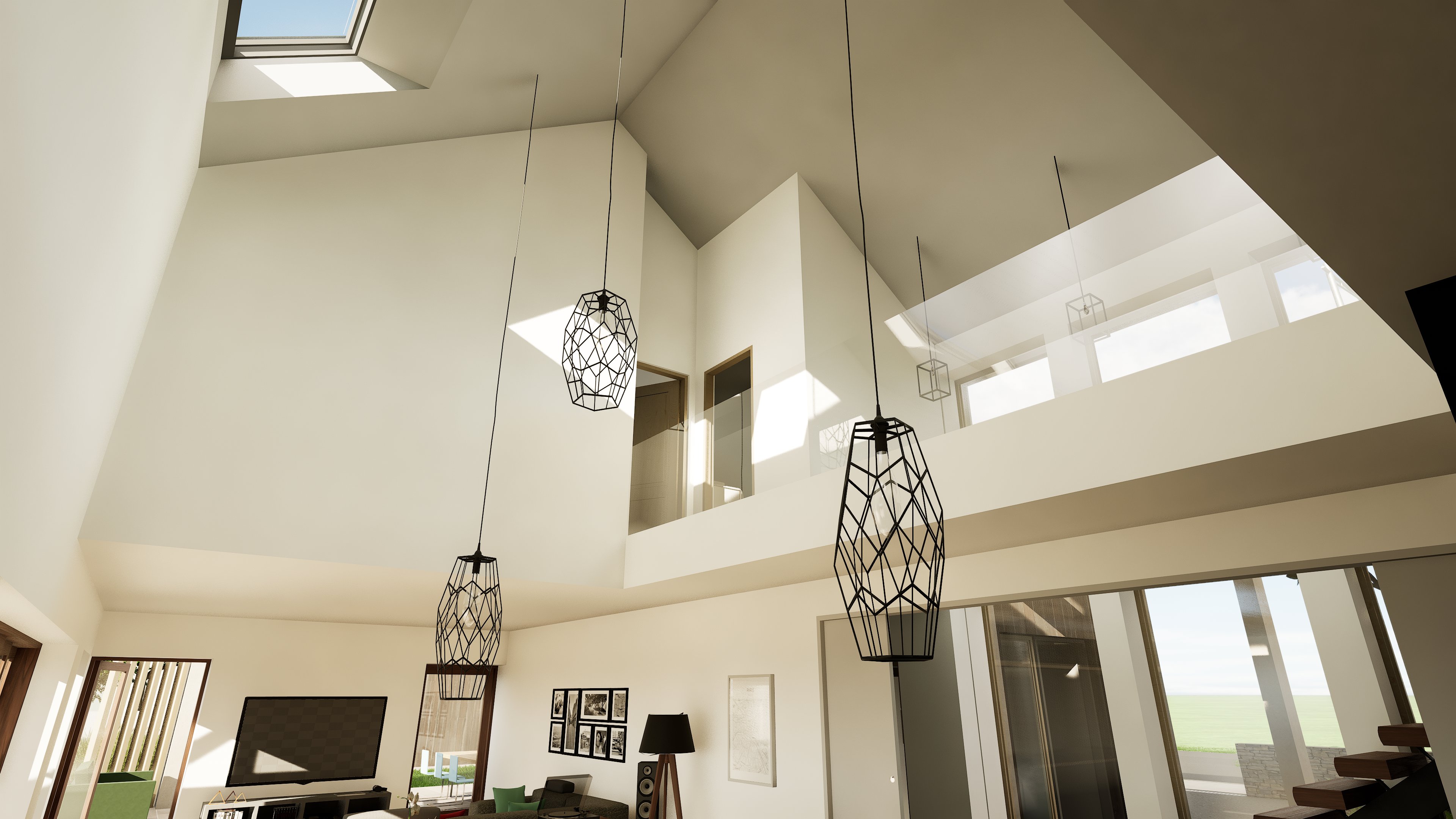 Continuing from the kitchen past the greenhouse door into the living room: 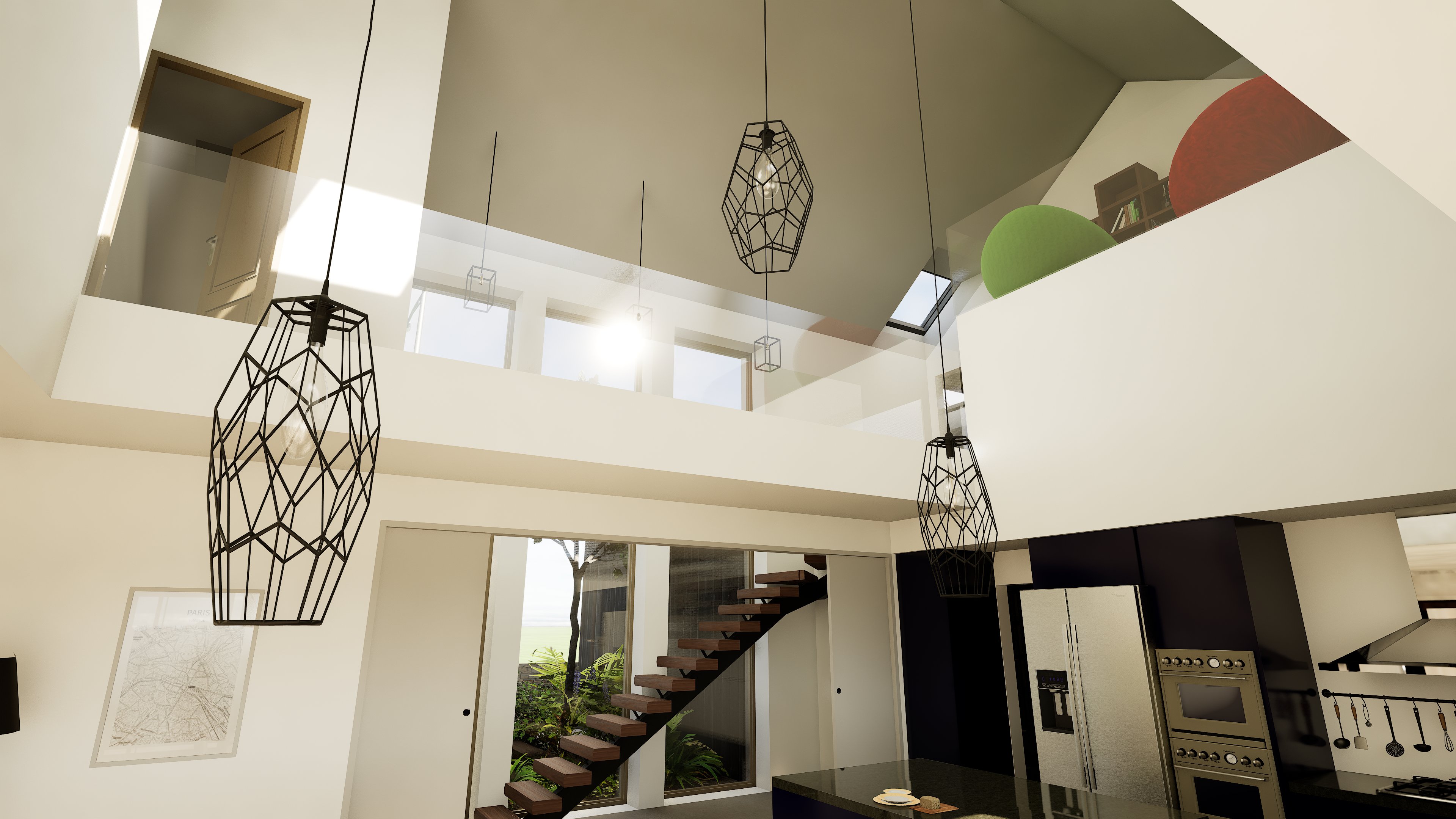 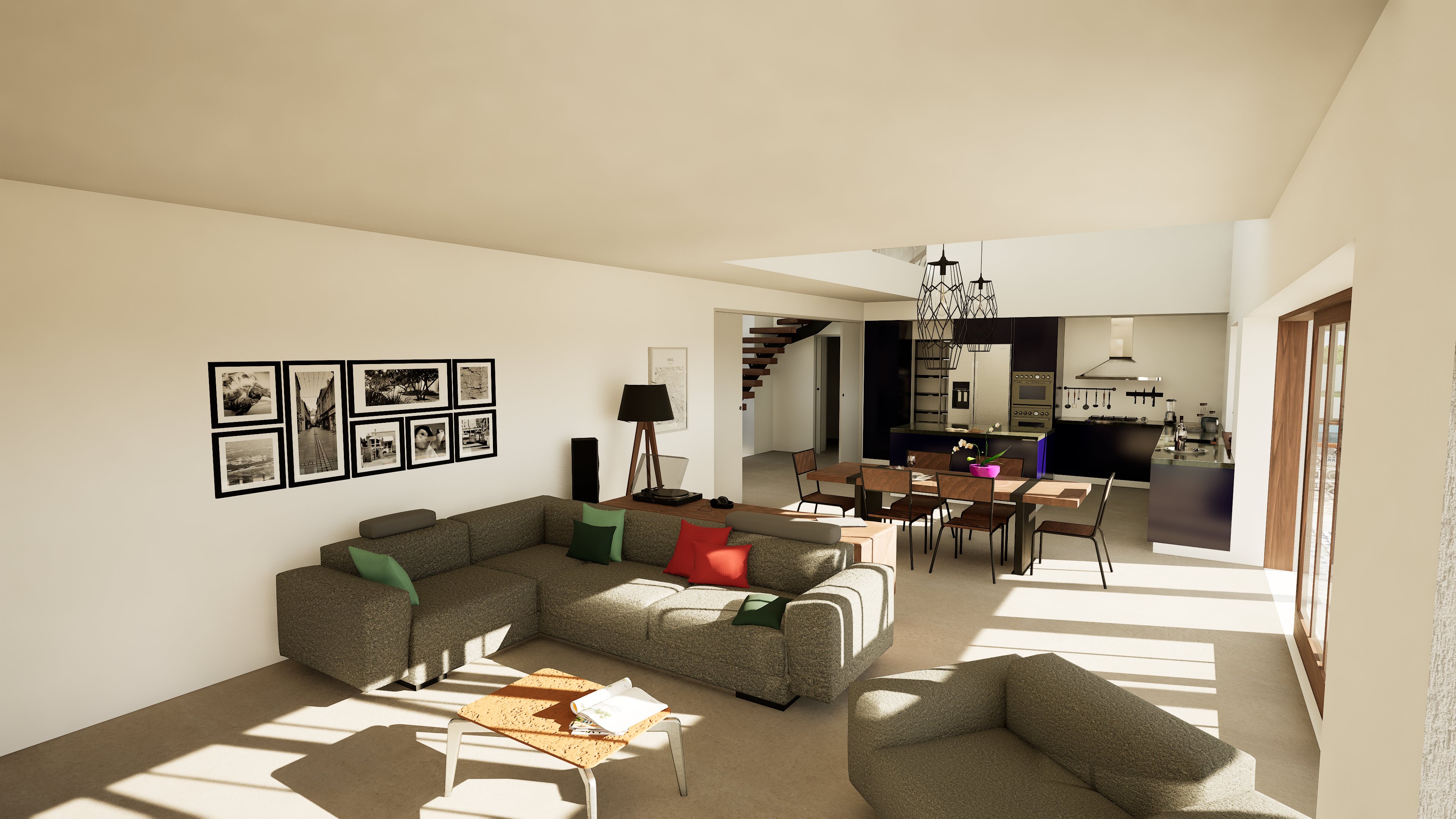 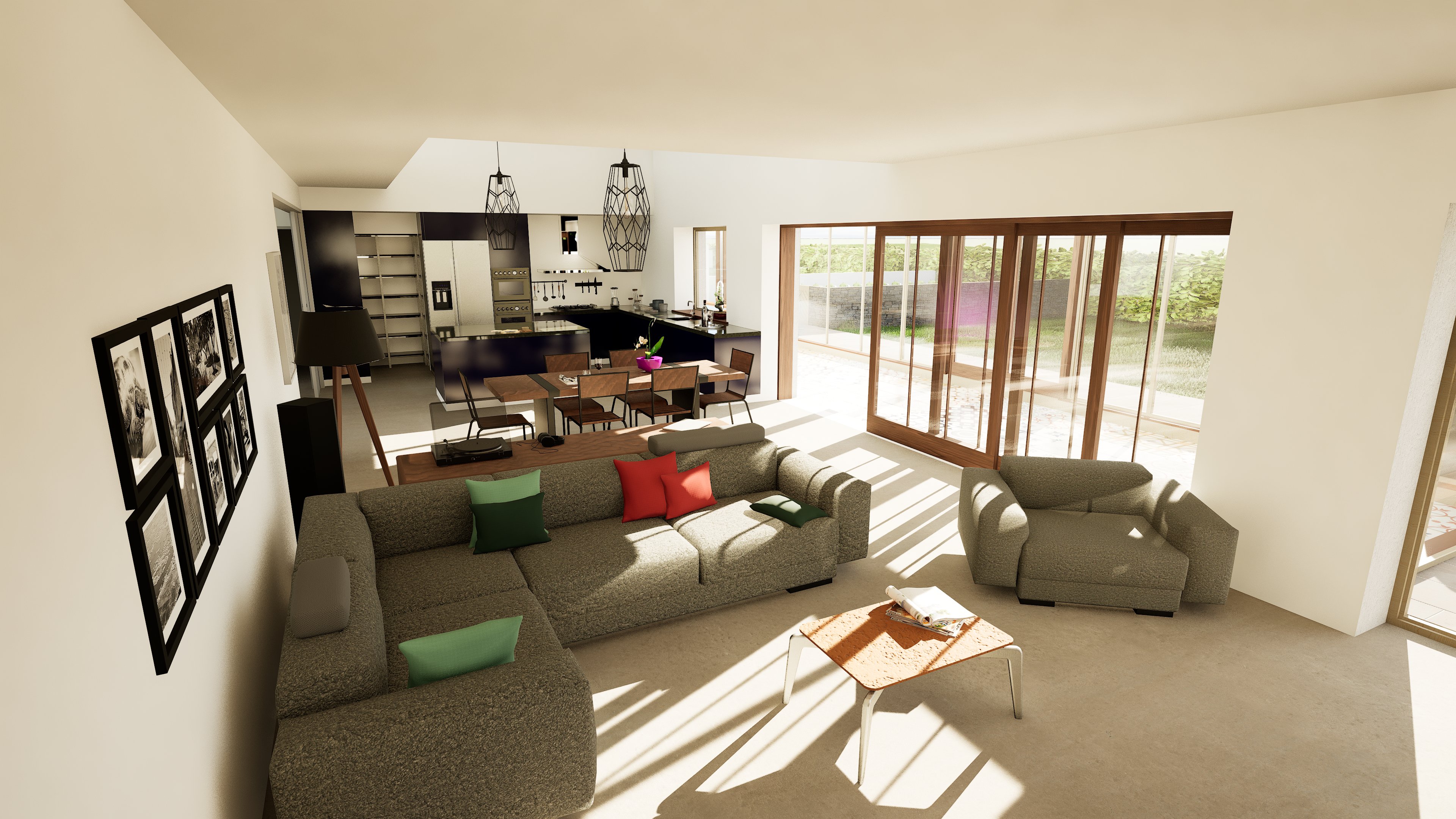 UE4 didn’t do a bad job of rendering shadows, materials and reflections, but UE5 is very considerably better. Note that the ‘fur’ on the couch is actually furry. Note that the fridge’s stainless steel metal accurately mushes up reflections. Note that the kitchen island very nearly has perfectly accurate reflections, apart from a few rendering artifacts. And similarly, the shadows are complex, yet well defined and have an appropriate blur based on distance. All ‘for free’ in UE5.

Moving upstairs from the top of the stairs onto the bridge: 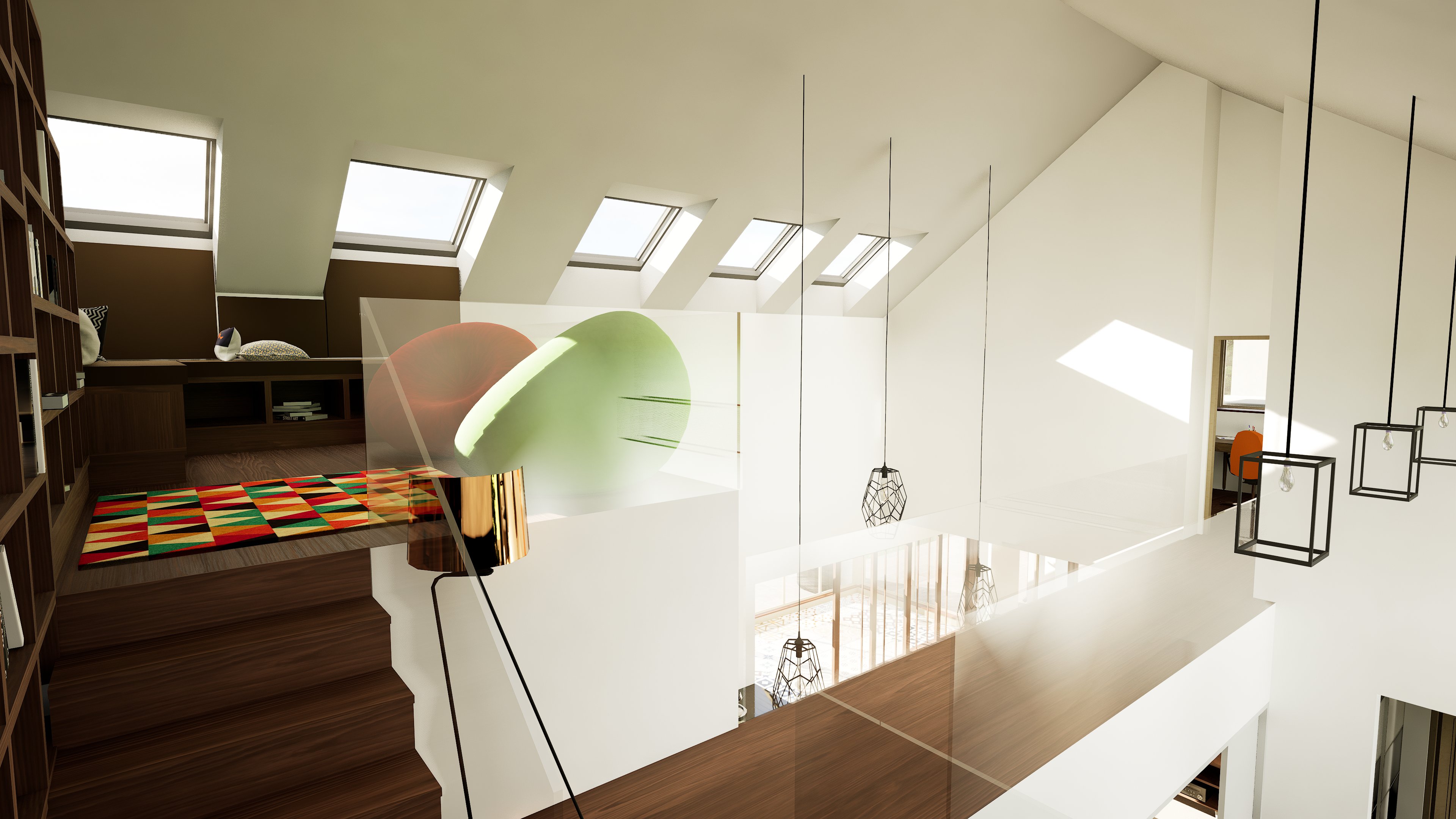 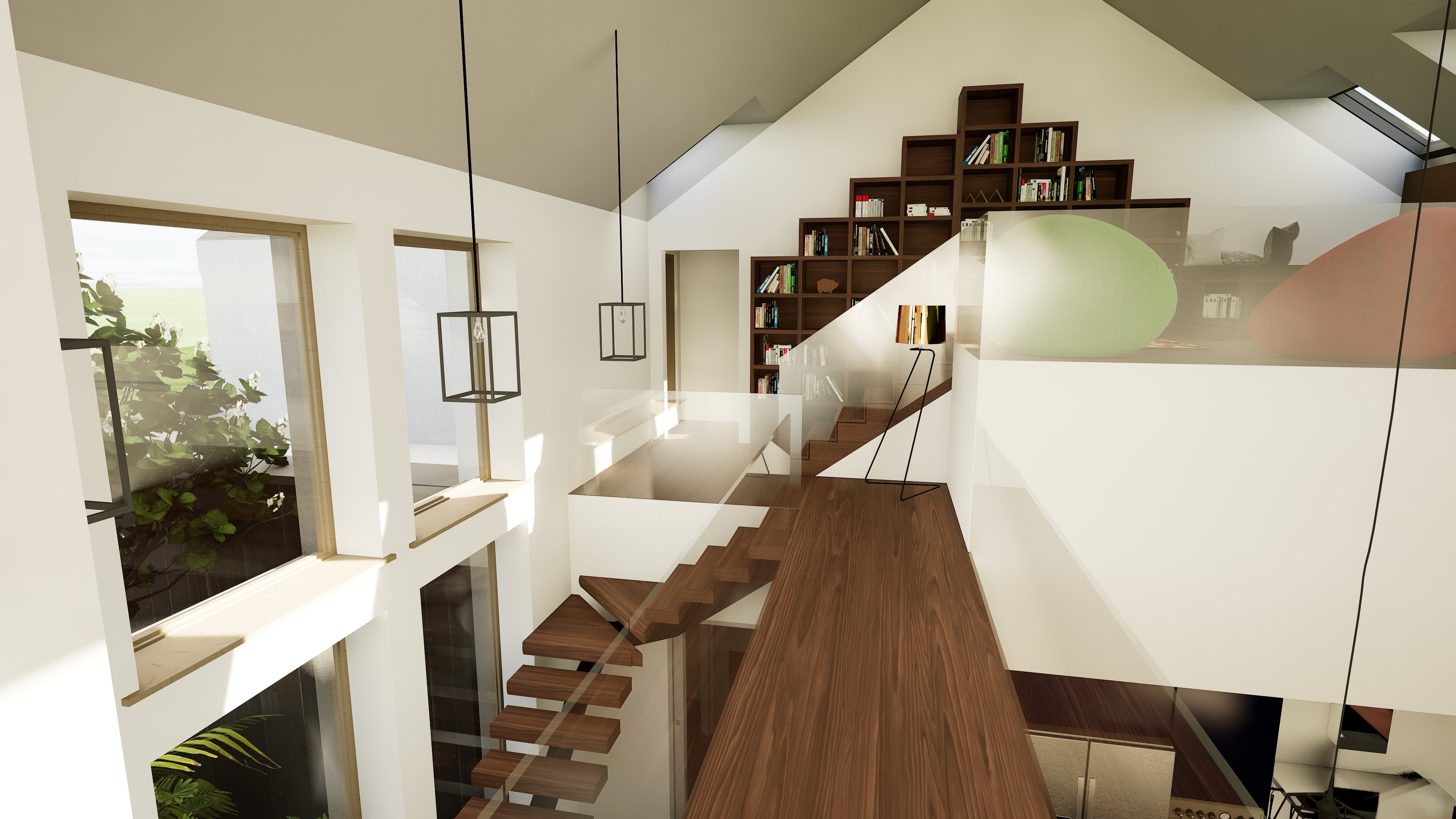 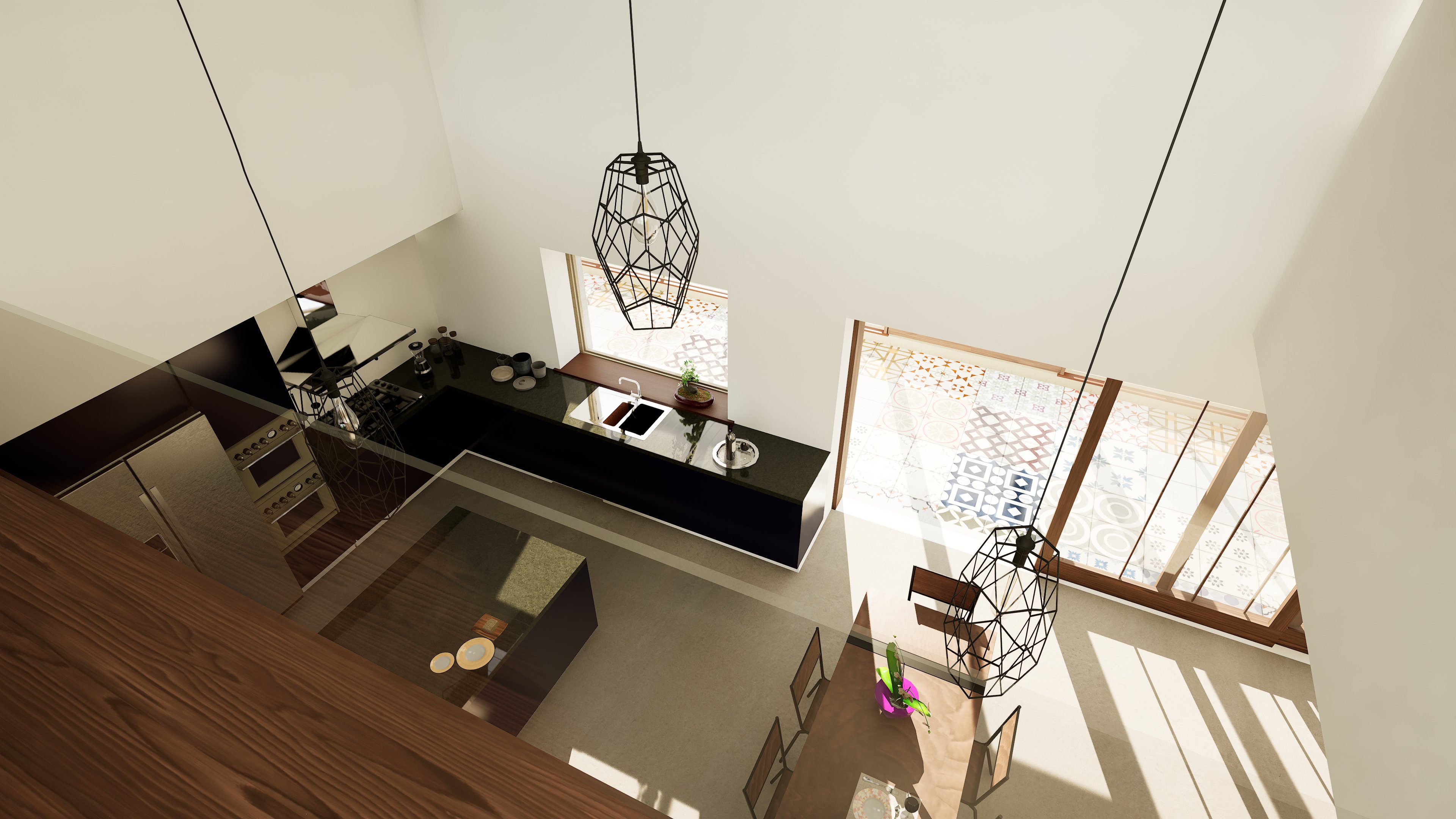 And then from the mezzanine looking down onto the Living Room – look at how well UE5 renders the reflections of the glass walls of the bridge, with the rightmost glass wall only having a partial reflection of the living room along its top because the bridge shadows the light from below: 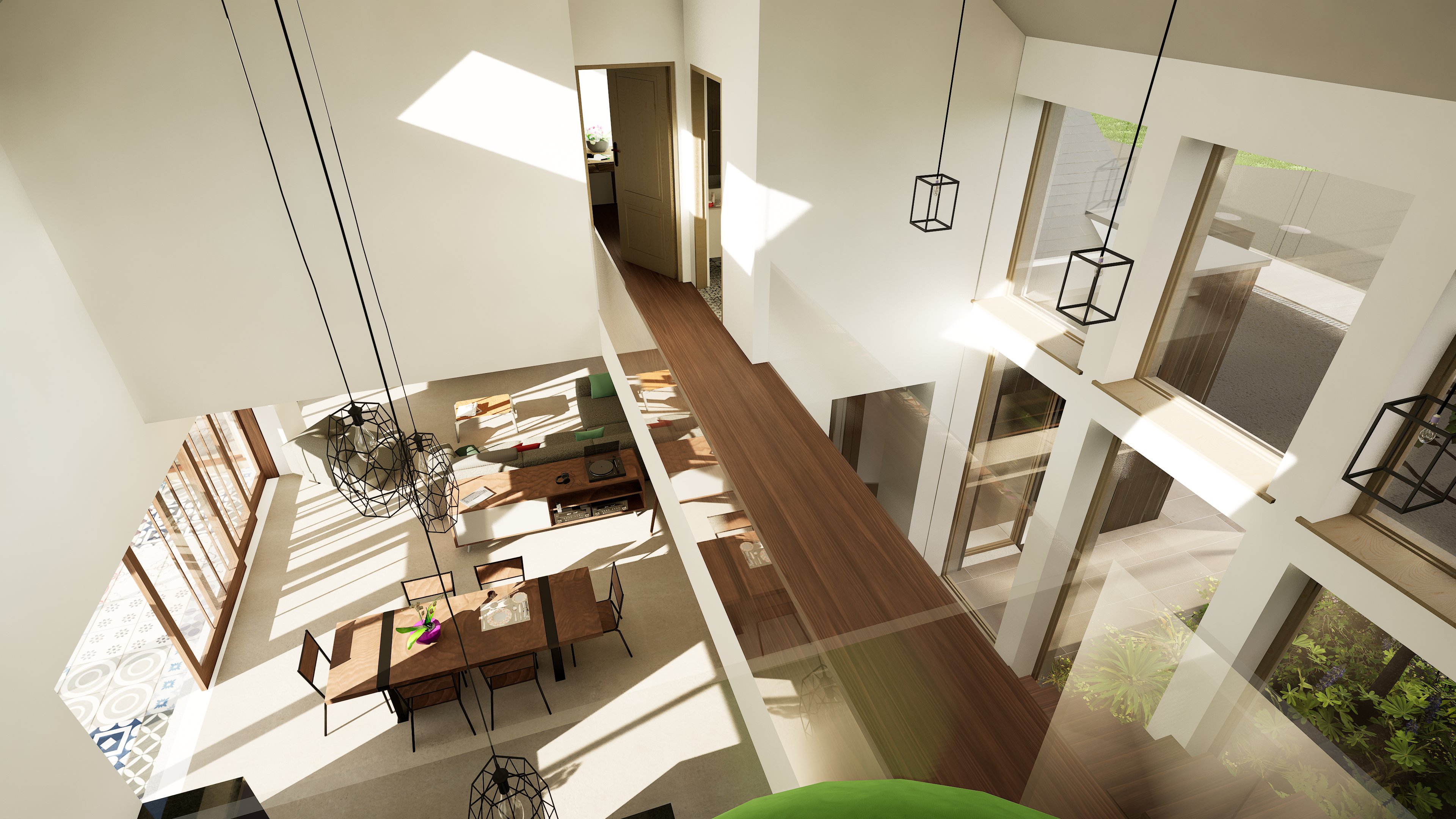 The only other two rooms worth screenshotting are the Games Room and the Master Bedroom: 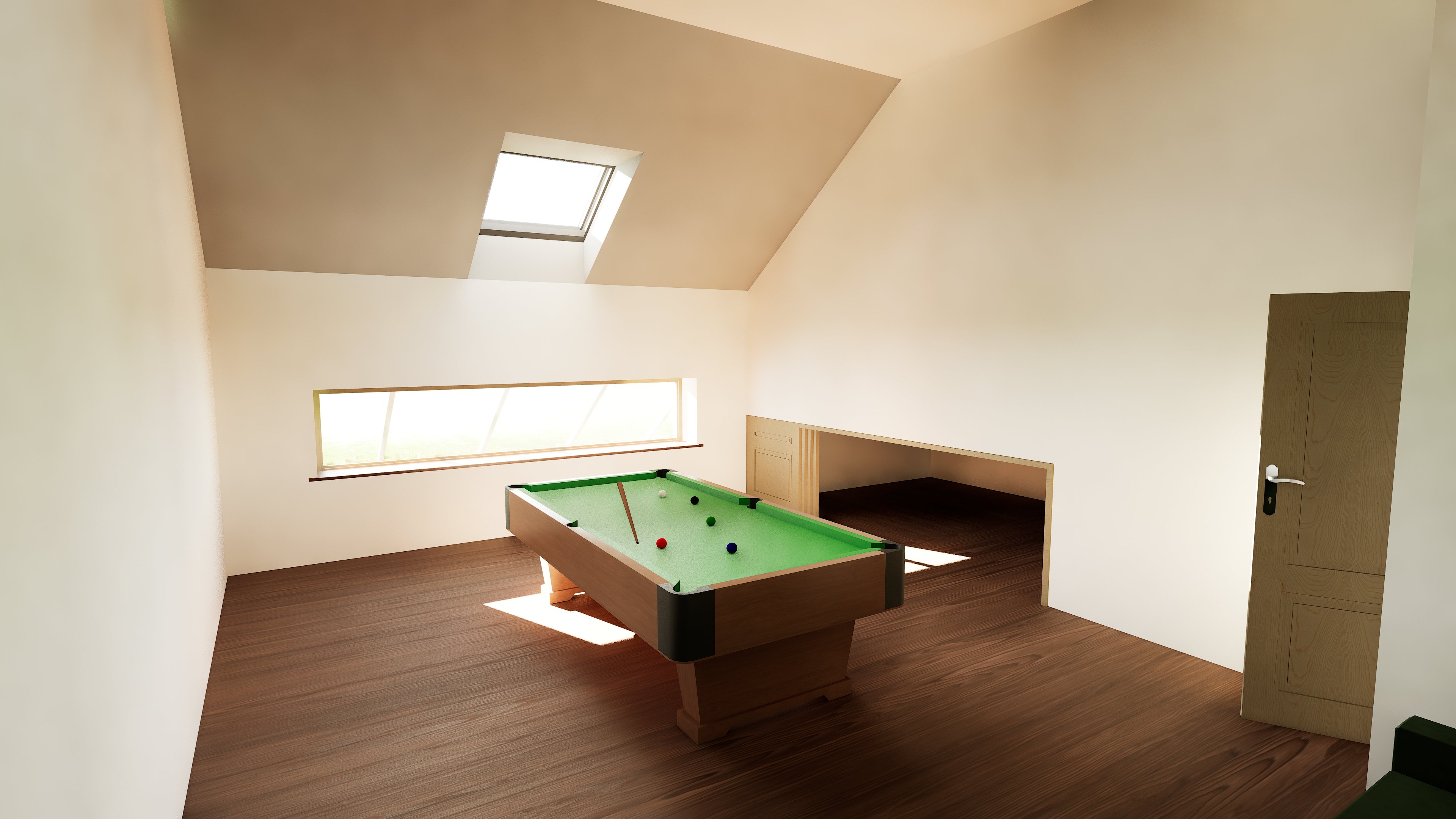 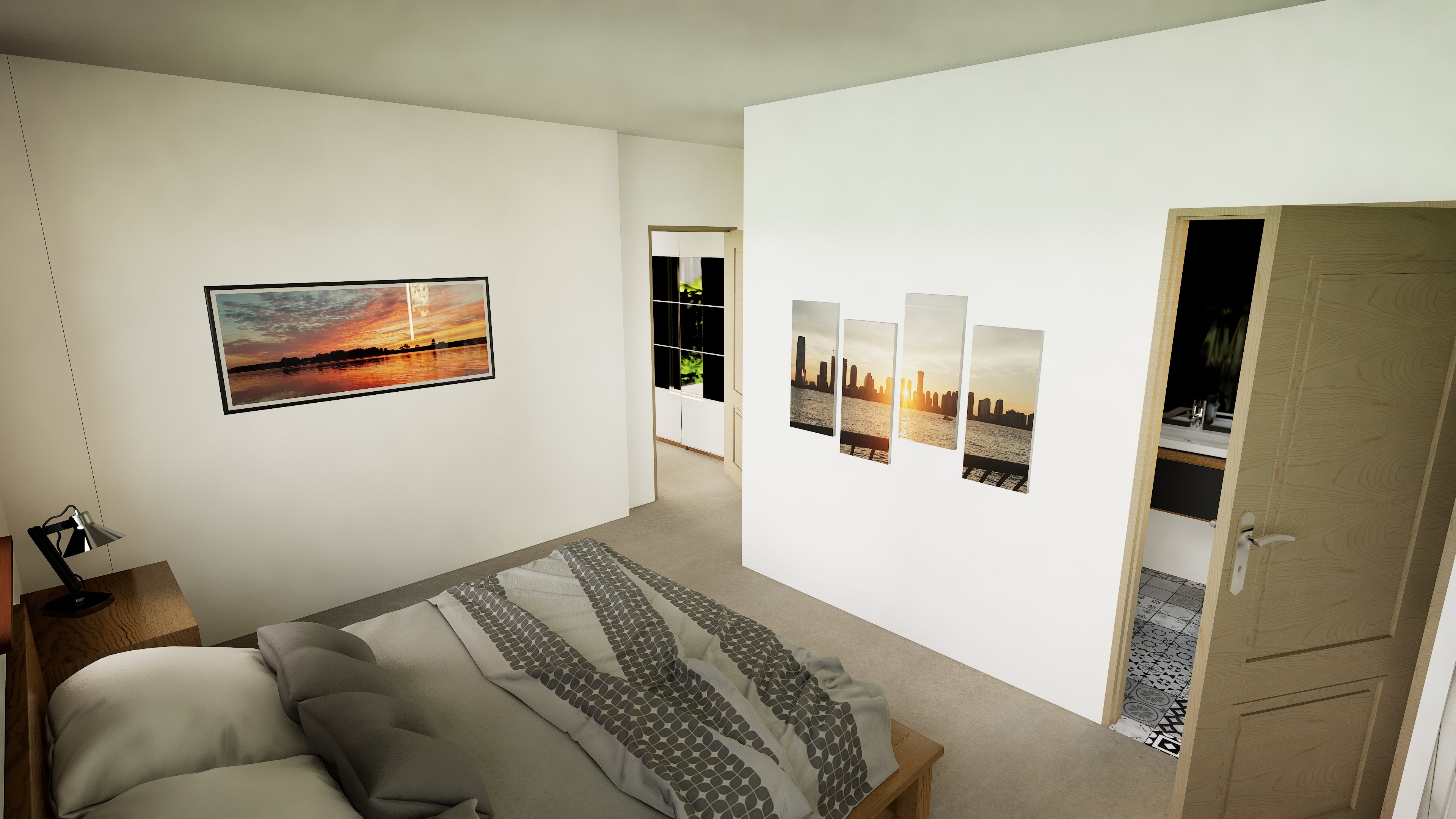 The games room image is another good example of UE5’s much improved light rendering. UE4 could only bounce white light without added effort from the designer, UE5 can bounce light based on the colours of the reflecting surfaces. So because the floor is brown, the light bounced onto the white ceiling is brown. If you adjust the season the sun beams land on the pool table and instead you get green illumination of the ceiling. All this also occurs ‘for free’ in UE5.

There are obviously more rooms in the house: kids bedrooms, shower-toilets, home office. But they’re bog standard rooms you’d see anywhere, so I didn’t bother taking screenshots. If you’d like to wander through the house in VR for yourself, I uploaded a copy to Twinmotion Cloud at:

How long that link will work for depends on Epic Games’ continuing generosity towards providing free cloud hosting and rendering for Twinmotion models, but for now it is good.

In a later post I’ll describe the POE-powered ESP32 based industrial microcontroller boards I ended up buying fifty of costing me over a grand, and how I plan to integrate those into Home Assistant. See you next time!