Sunday 6 February 2022: 02:58. It’s been just under three months since my last post in my series on my future house build, and during which of course Christmas occurred. Since the New Year pretty much all my free time has gone on getting the planning application ready – it was submitted last Tuesday, and so I now have the time to write up what happened since mid-November.

The preplanning feedback came back the week of Christmas, so we didn’t really get much time to digest it before everything stopped for the holidays. Things didn’t really get going until mid January, whereupon we started acting on the feedback (which I have slightly edited for privacy and clarity):

I have reviewed the proposal submitted and I would have the following comments to make in relation to same.

If the above seems vague, non-commital and rather hard to discern exactly what they want changed, that would be normal for preplanning feedback – nailing colours to a mast removes later flexibility. That said, after a bit of thought and study their feedback could be rewritten into more concrete terms thusly:

To deliver on these we did:

This 17 metre design looks very much like the 20 metre design submitted for preplanning I showed pictures of last post, but we had to make a fair few changes:

Otherwise, apart from size changes, things remain as they were, though energy efficiency according to the PHPP takes a dive of about 20% because there is much more surface area than before for less internal floor area. Also, the margin for minor builder error in airtightness to reach the Passive House Plus standard shrinks from 40% to a mere 24%, a 67% reduction

I am fortunate that Twinmotion 2022 beta had come out since the last post, and using it I was laboriously able to make ray traced images this time. They look a lot better than those from the previous post, though I had to dial down the quality settings severely given my emaciated graphics card. Note that these are missing the greenhouse on the back and a few other minor changes. 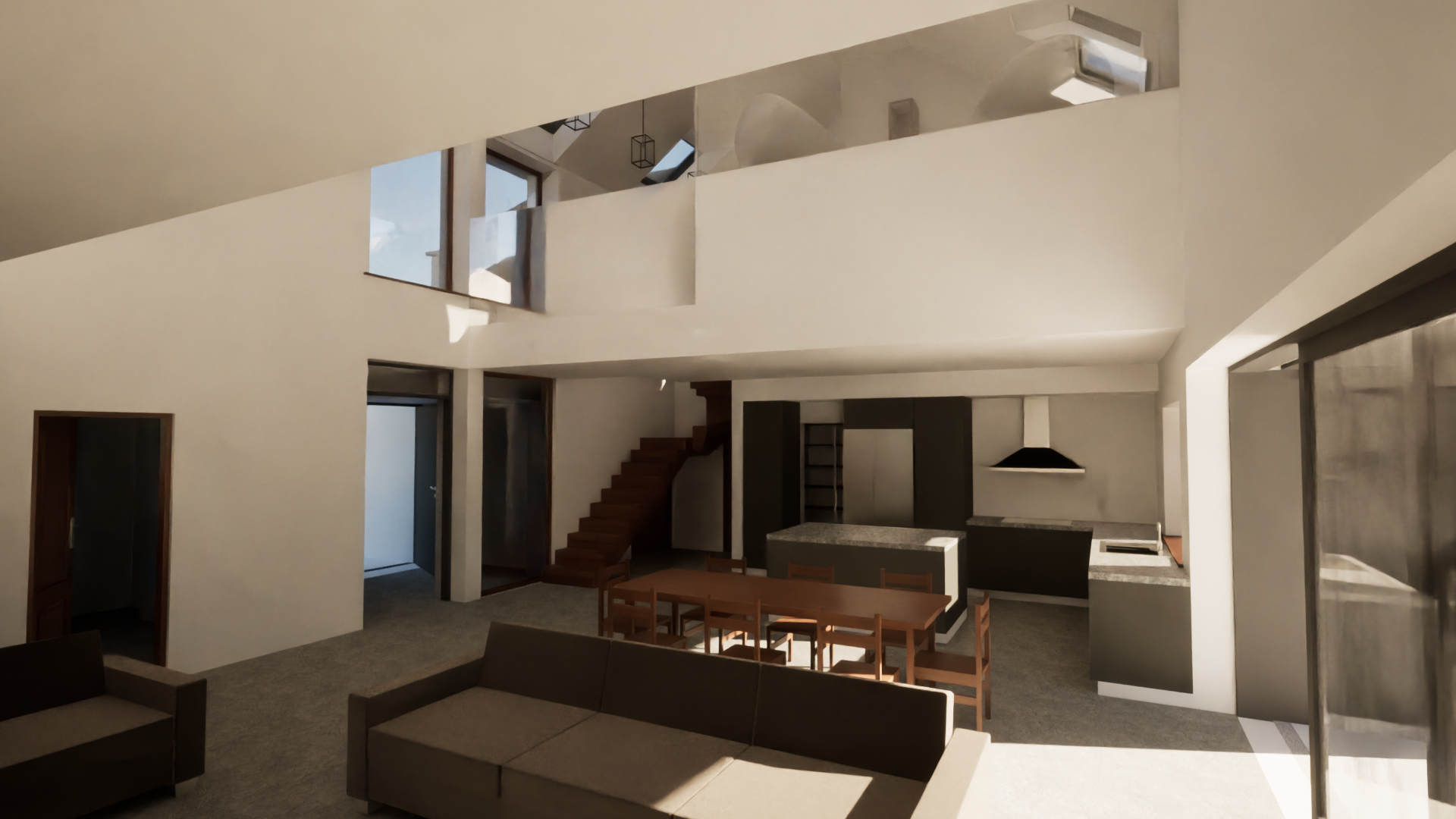 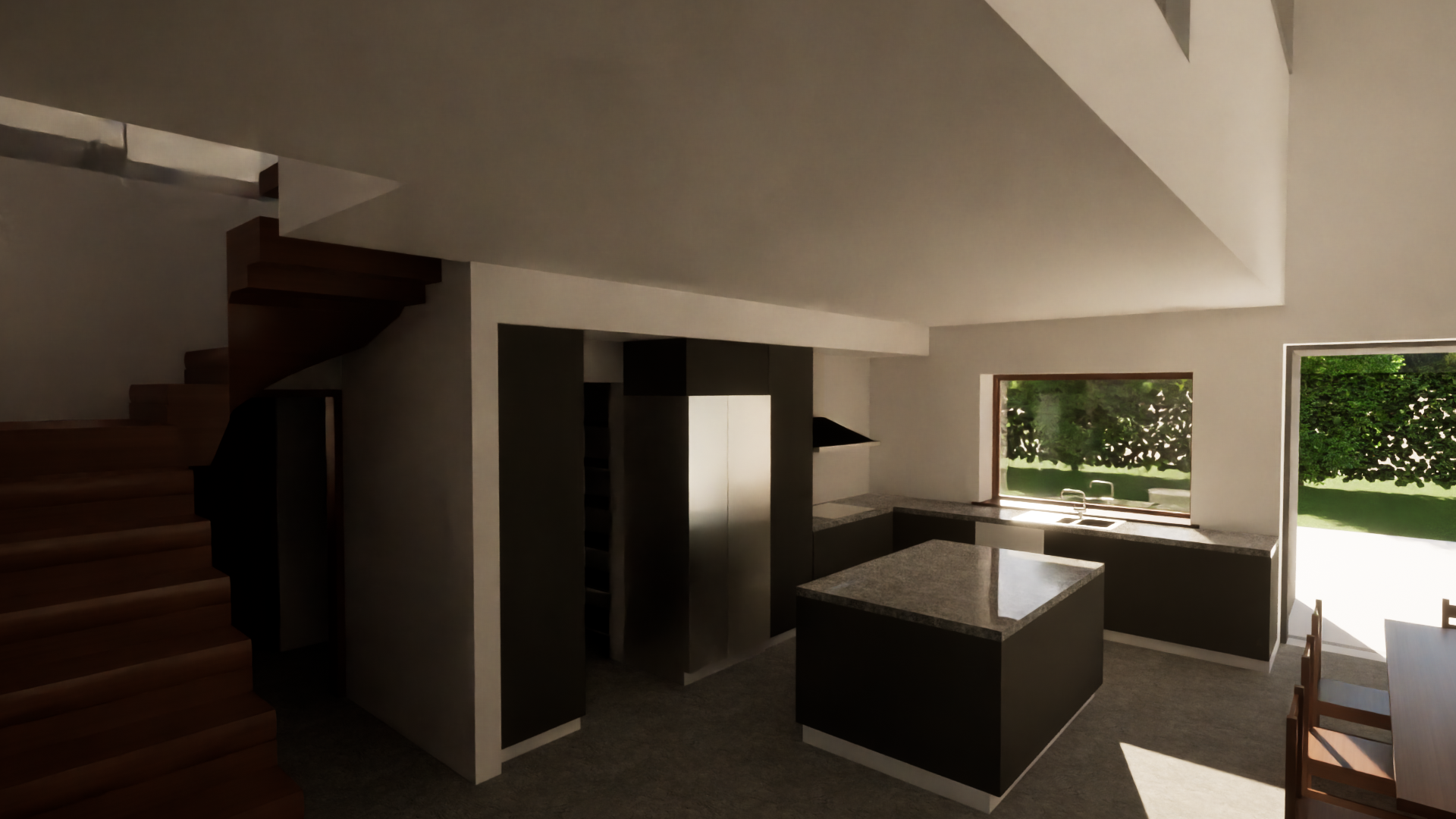 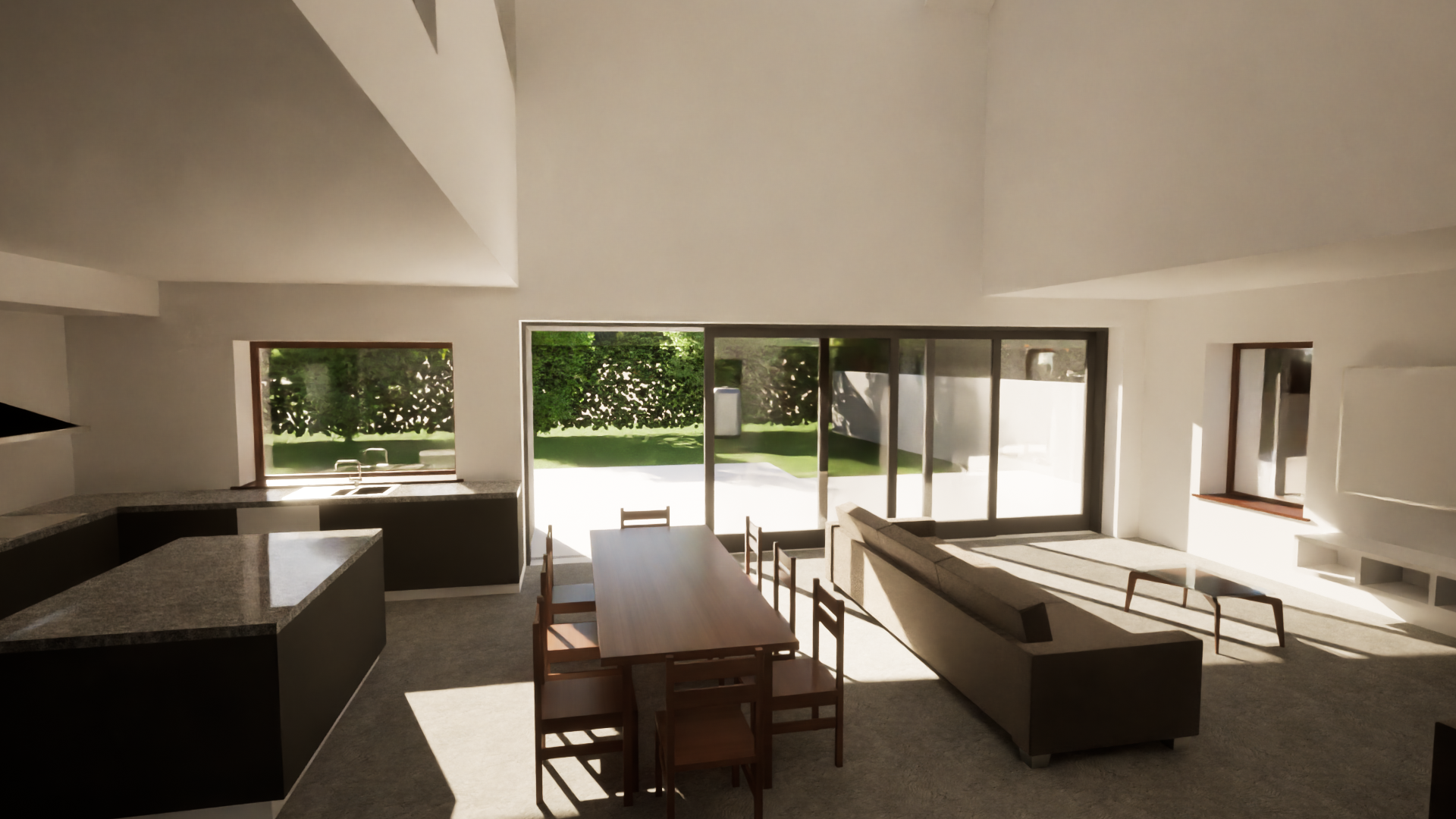 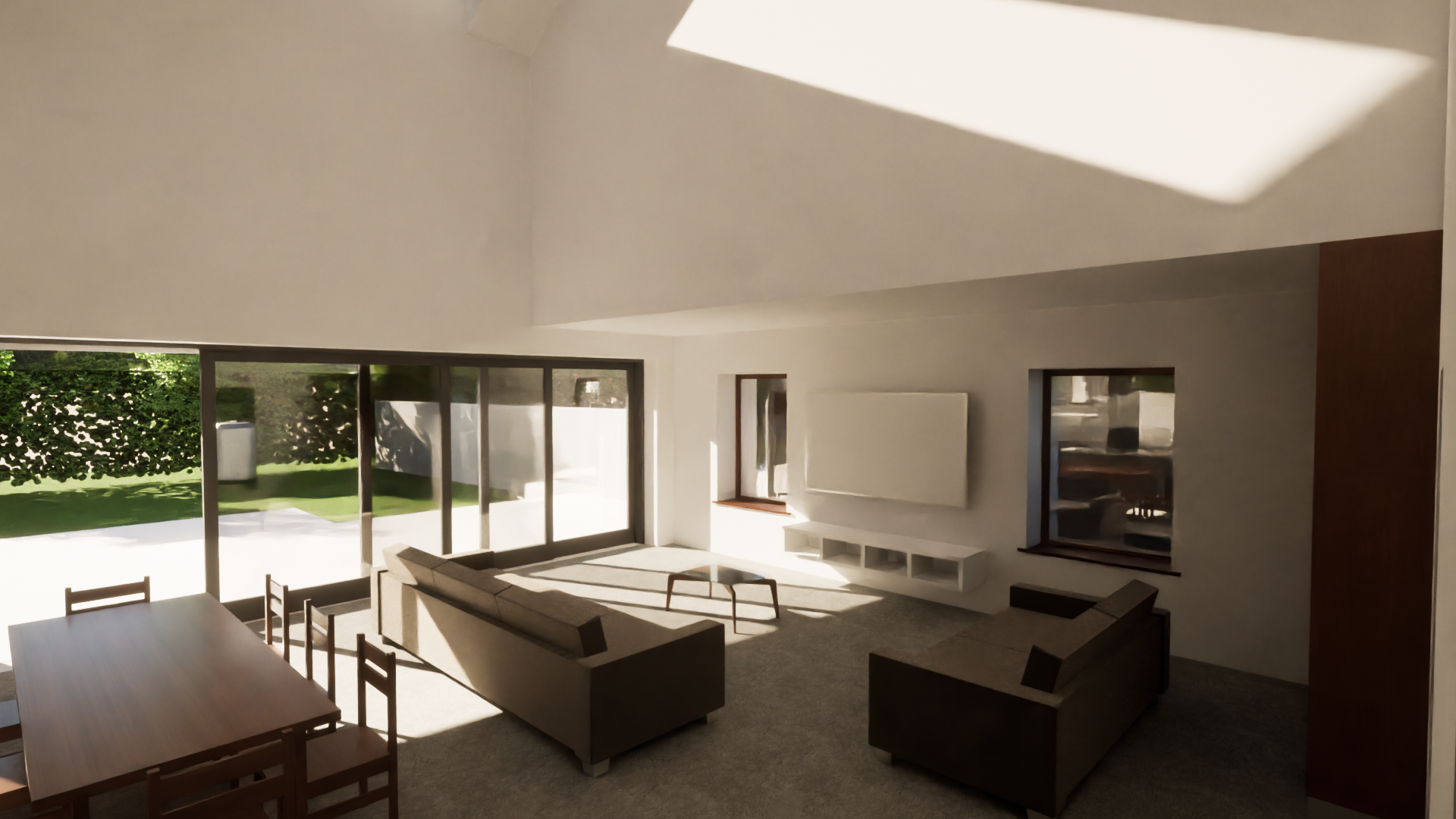 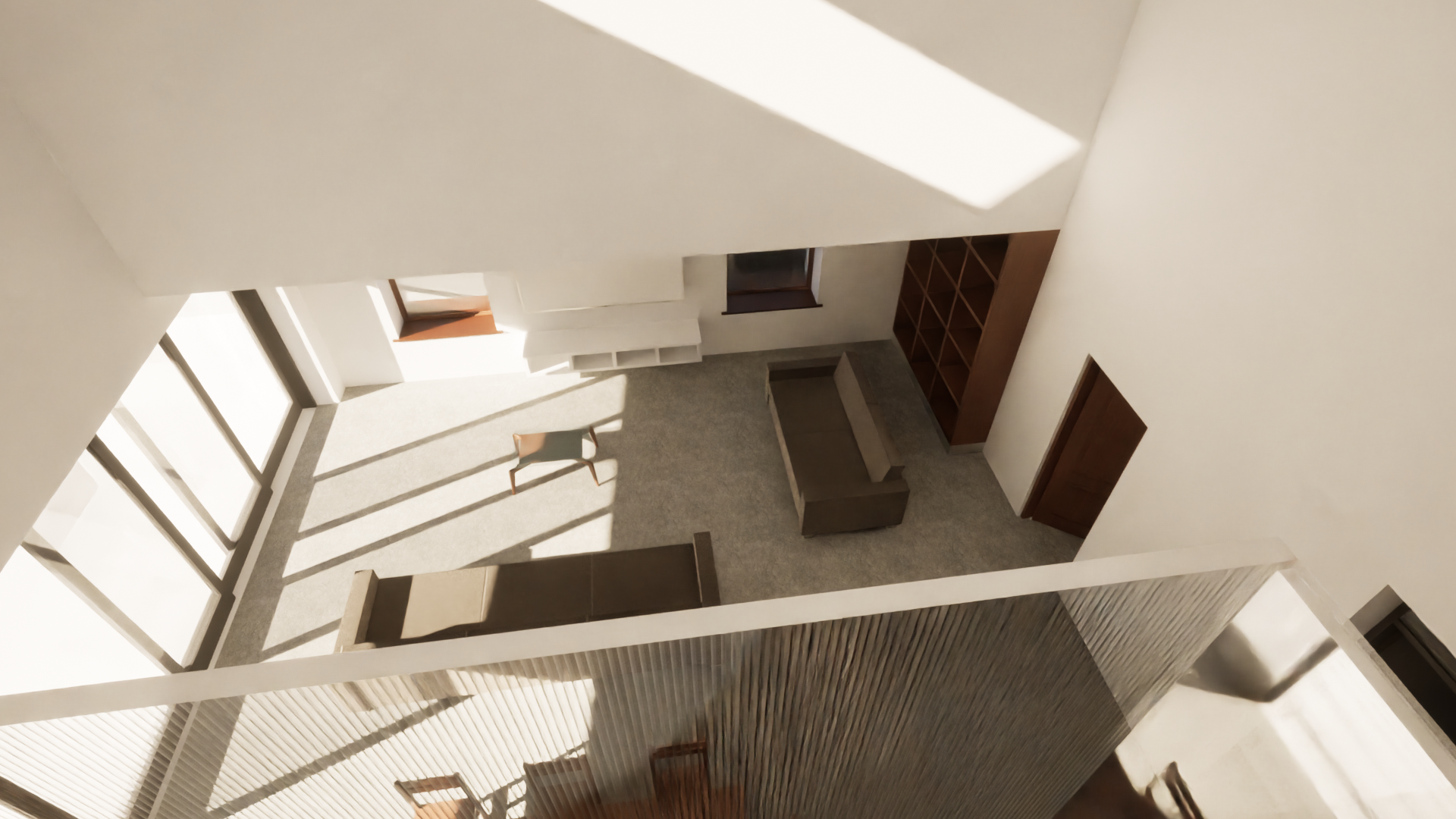 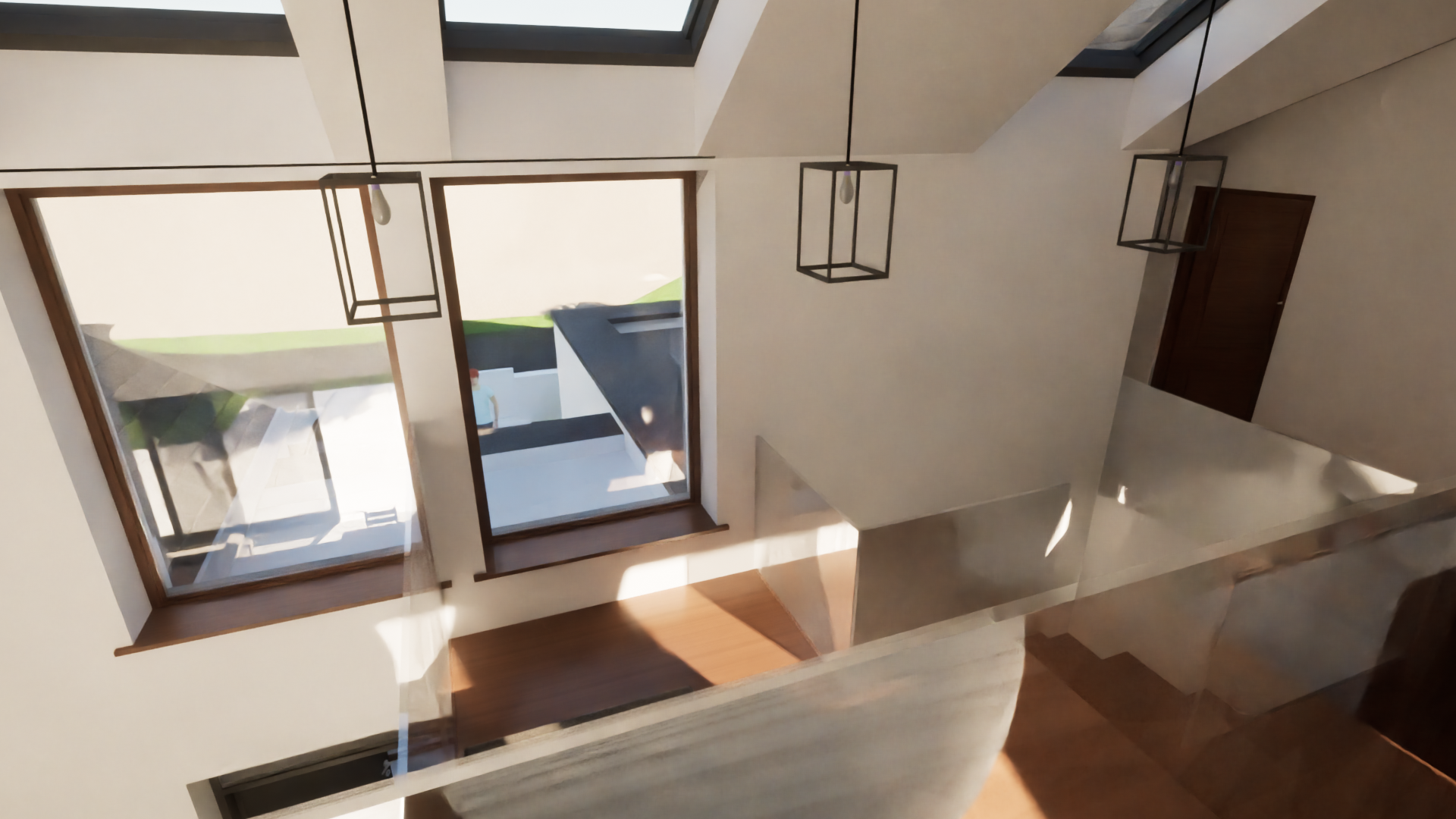 There is also the master bedroom and the games room: 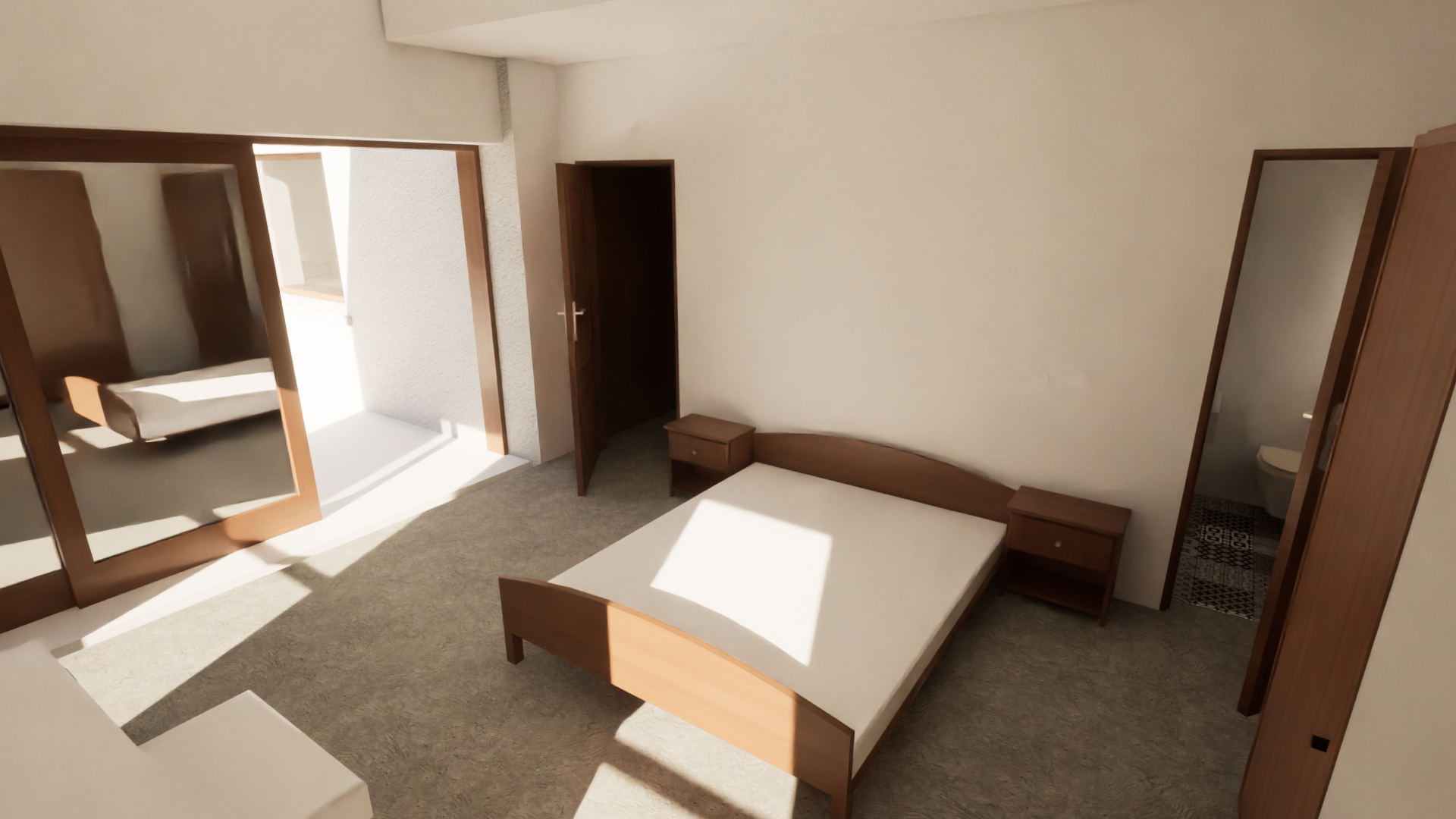 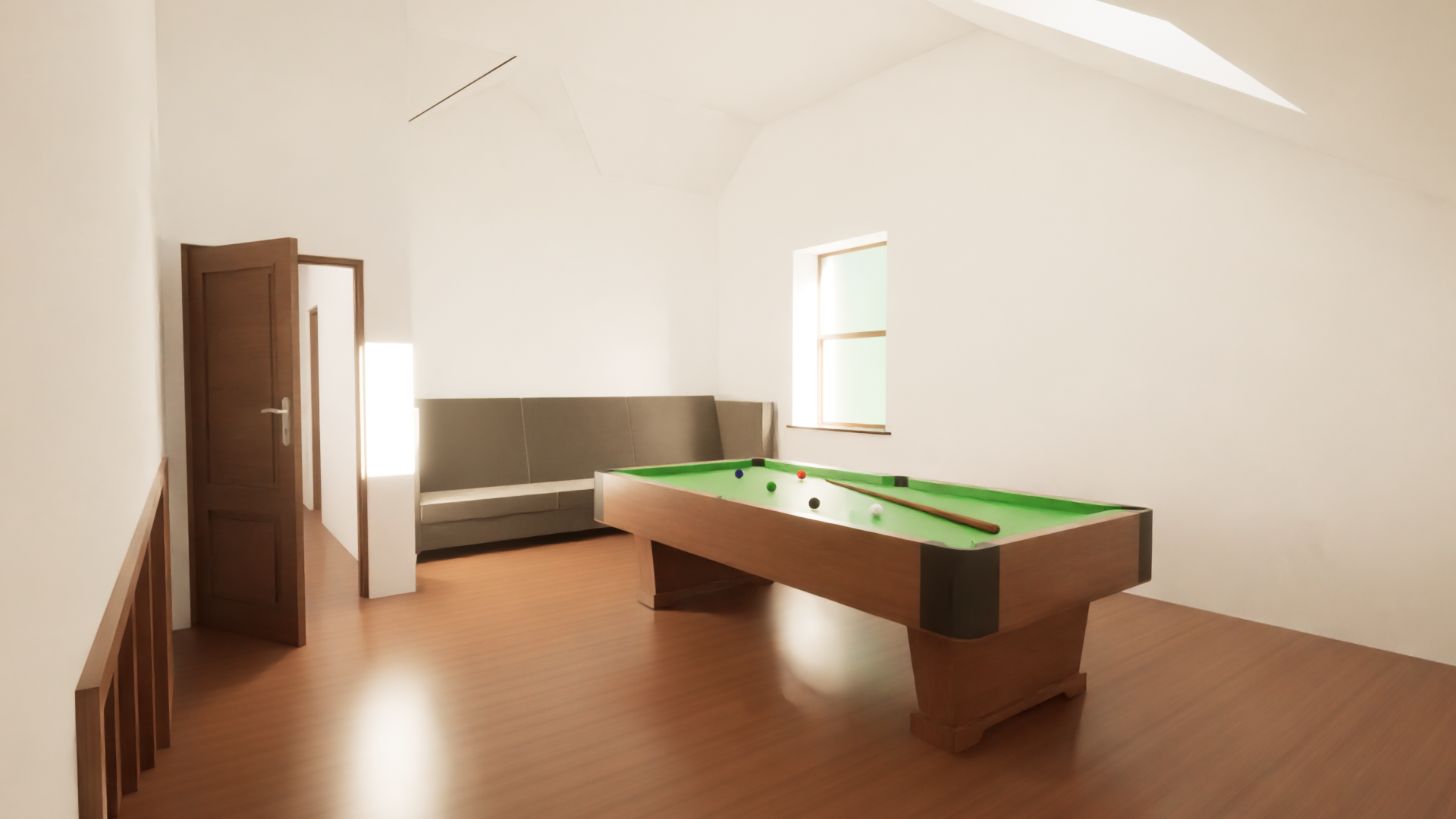 Heading out of the master bedroom, which has a door opening into the back garden, the back of the house is remarkable only for the number of solar panels on the roof: 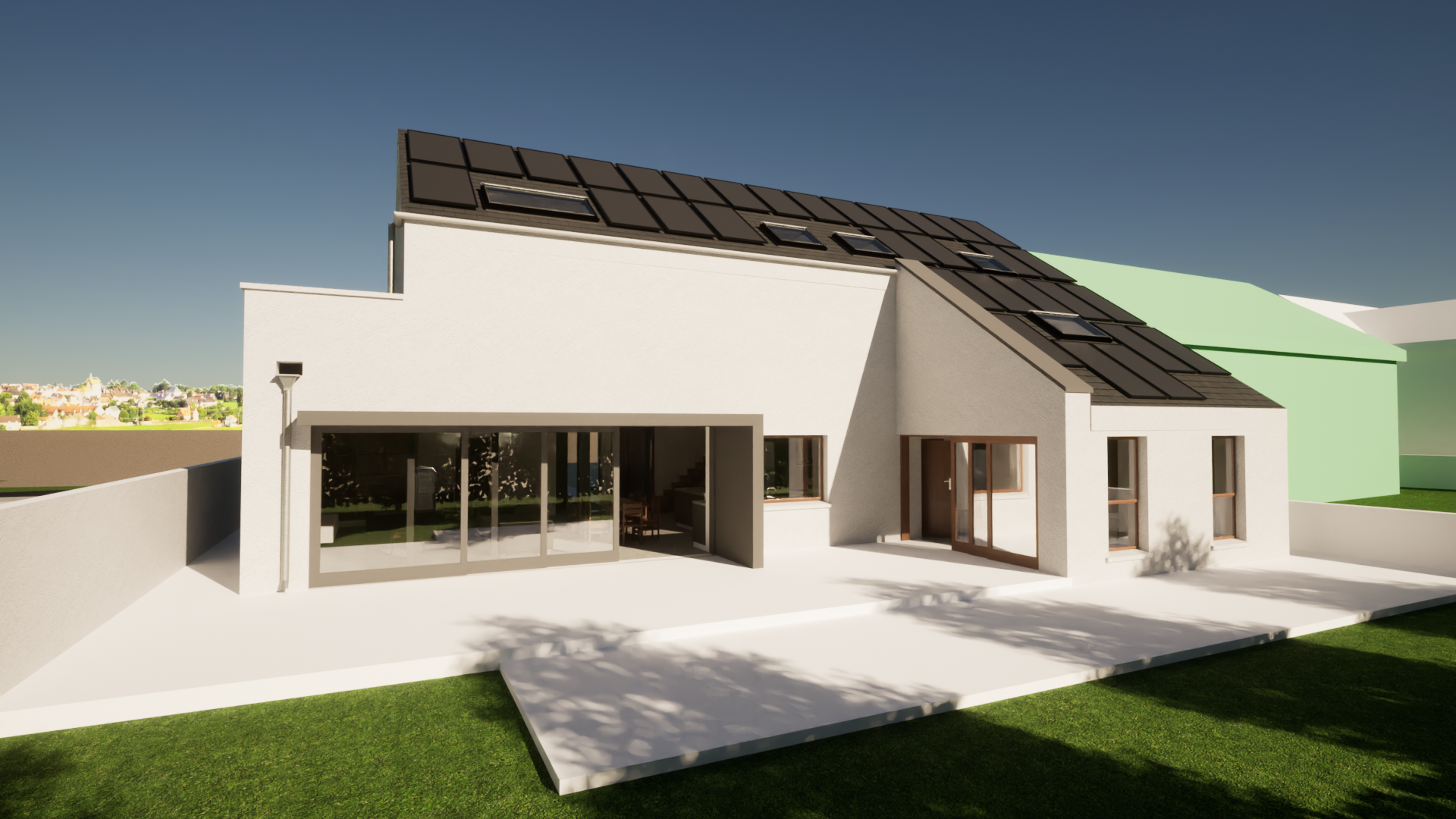 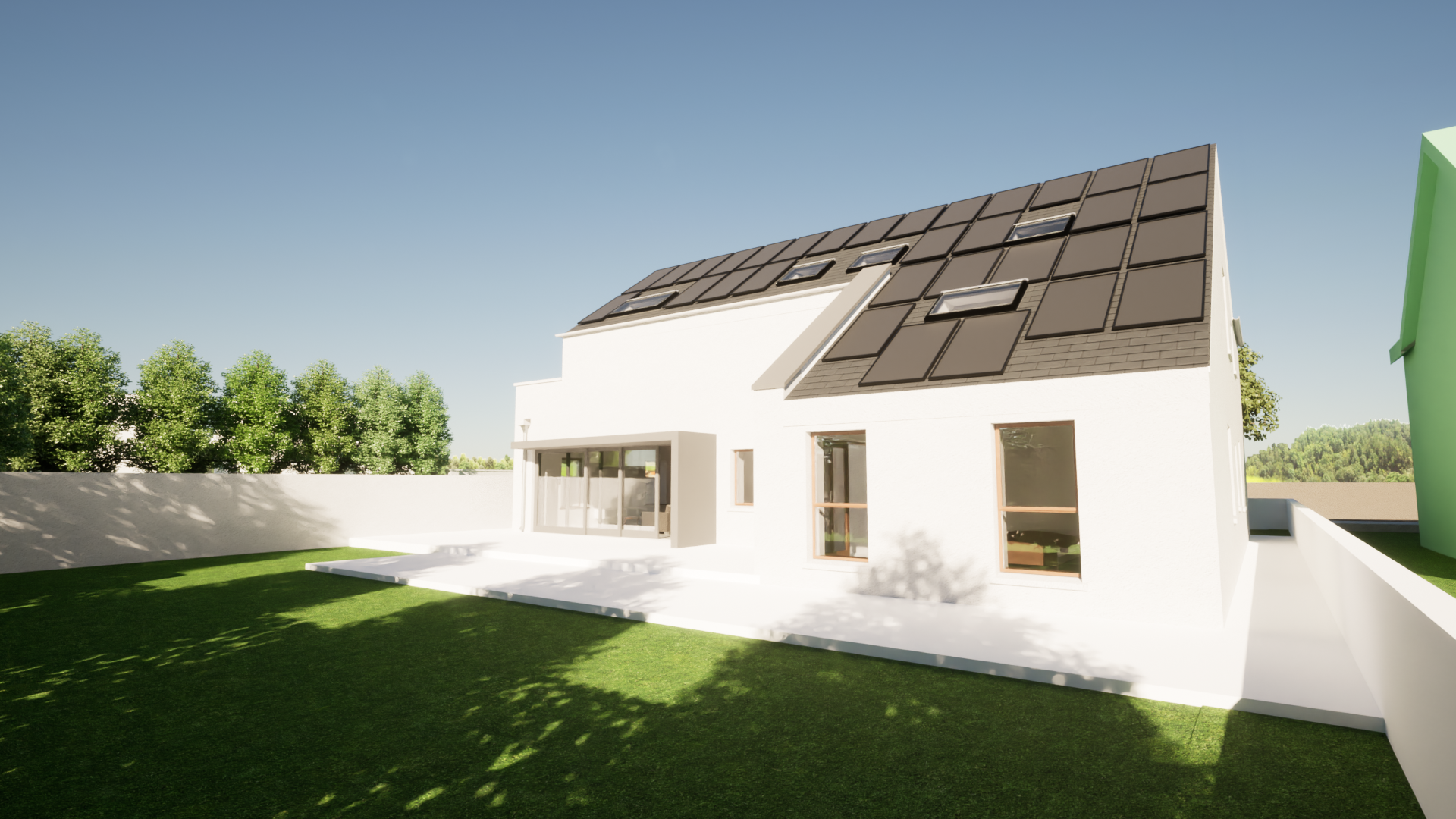 A reminder that the lean-to greenhouse on the back was yet to be added, and the green ethereal building next door is a hypothetical house. Moving around to the front: 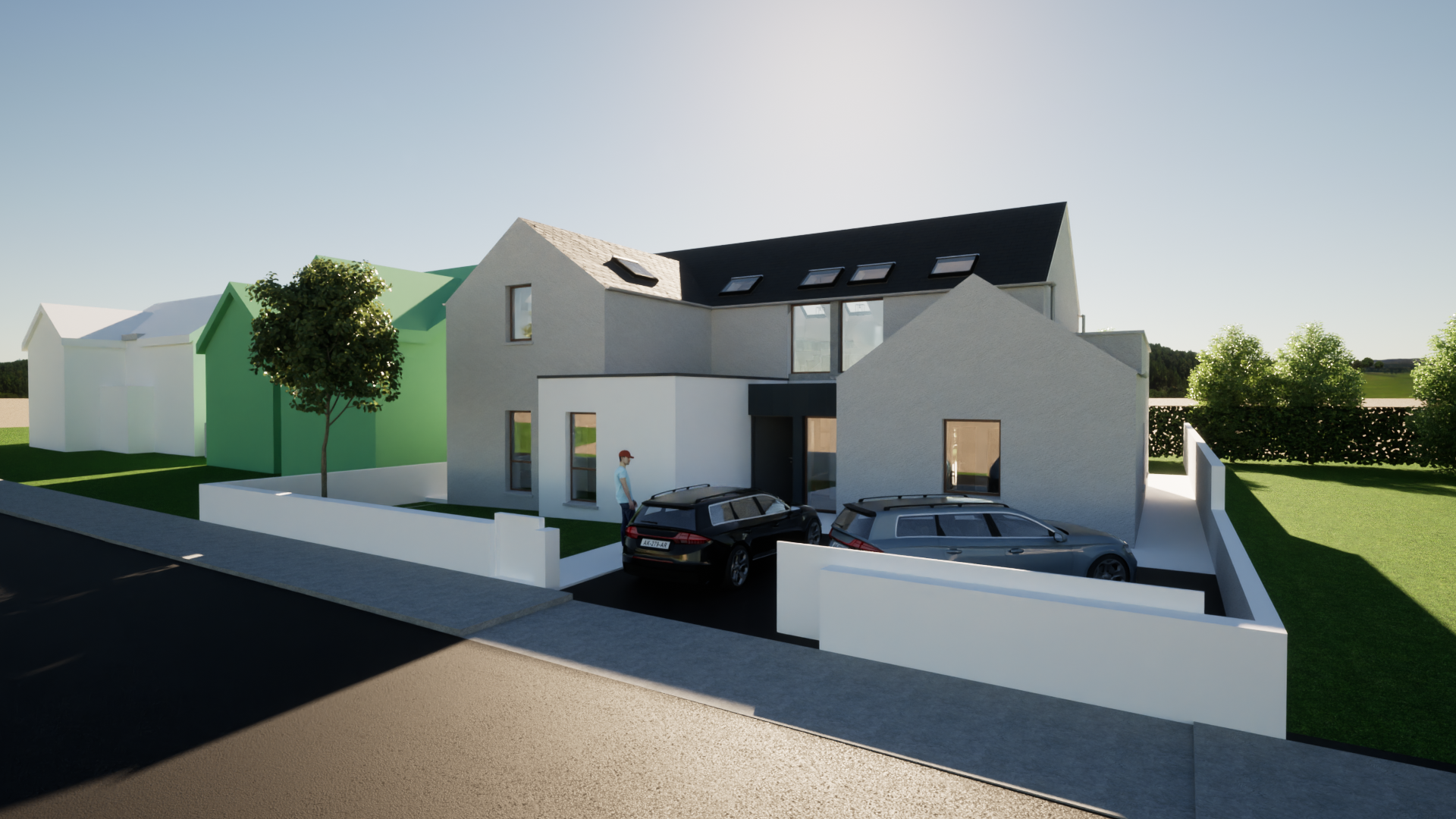 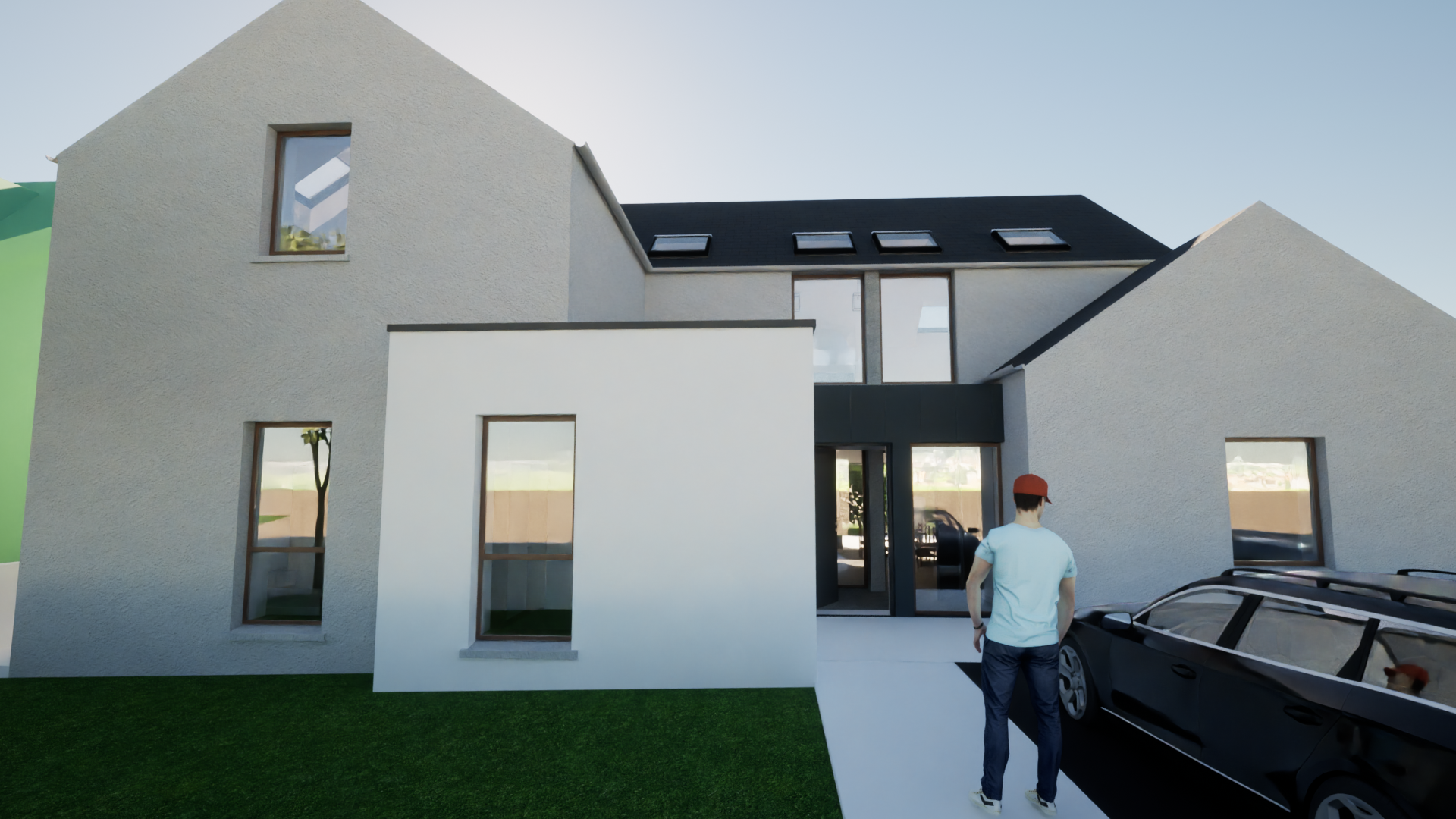 As you can see, we have hacked back the surface area of unapproved materials severely, with the northern glazing column reduced from three wide panes to two narrow ones, and the bottom half broken into a forward extended metal porch, albeit without much metal showing. This shrunken design surely should tick the planner’s boxes.

Now that the shrunken design on the single site 30 is submitted, our next task is to prepare the planning application for the 20 metre wide house in collaboration with the Planning Consultant. No doubt she will write the application in a way that if it gets rejected, it is designed to go straight into An Bord Pleanala, the national appeals mechanism for planning. That takes a further four months and yet more money in fees of course.

However there is a third option – submit a third planning application for the same land, this time with the shrunken house occupying Site 29 but with the boundary around both sites, possibly also with the outhouse from the slightly larger house. It can thus be argued that Site 30 has not been consumed nor made unavailable for future development in any way. Whether this is worth doing, or is feasible, depends on how the Planners react to the 20 metre wide house: if their primary objection is that the extra three metres of width renders the other site permanently consumed, or that three metres longer makes the house too bulky compared to neighbouring houses, but otherwise they don’t object, that would seem the obvious path forwards. If, on the other hand, it is the fundamental principle of granting planning on amalgamated sites at all as it would set a precedent, then it probably doesn’t matter what you put on those two sites. We’ll only find out when the Planners deliver their verdict.

Assuming that getting a verdict on the single site application will take four months, that puts a decision into June, with a decision on the dual-site application probably landing in July. Completing the purchase of the site might take two months starting from June, so nothing more could happen anyway until August. If it then goes to An Bord Pleanala, I suppose concurrently we submit planning application number three and we should hear back from both of those around December 2022. We then could begin detailed construction drawings which I can’t believe would take anything less than four months, probably six months, given that the Energy Consultant will be in there, as will a M&E consultant and probably a garden designer. Thus only in June 2023 would one be ready to approach builders for construction quotes as the upper bound, with the lower bound no earlier than January 2023.

Both are rather a long time away, though almost certainly by then price inflation should be getting tamed by interest rate rises and a slowing economy should debottleneck materials and labour supplies. I’m also not entirely sure that even if we booked construction by the end of this year would it actually speed anything up given the backlog in the self build industry, though it would almost certainly cost us more. So, in all probability, it will be 2024 no matter what we do before construction begins.

My original plan was to build the outhouse first and install services into it, this would let me commence building and thus be eligible to draw down €30k of government subsidy, lest the government reduce that next budget. I’m also minded that commencing the mortgage sooner rather than later would lock in a lower fixed interest rate for the first five years. Might it be doable by September of this year, give it two months to get approved, then submit commencement for December in order to claim the subsidy? Maybe, though it’s a bit tight.

Let’s just hope that the government extends the subsidy into 2023!